Projects on our knowledge applied to footwear (CLAC, IBV).

Together with the shoe cluster and the Instituto de Biomecánica de Valencia, several projects were developed to create new solutions aimed at children’s footwear by performing several tests in schools, with outstanding results regarding improvements in the children’s stability and comfort.

Collaboration meant to prove what would later become a European project regarding the use of new insole manufacturing using sintering technology.

One of the most important and differentiating innovations at Podoactiva is the scanning system using a tension-adjustable membrane (Podoactiva 3D Scan Sport®) which was developed jointly with the Universidad de Zaragoza. A study was also conducted to evaluate and test new materials for manufacturing Podoactiva insoles, resulting in the material Podoactiva Dynamic, made in Germany exclusively for Podoactiva. 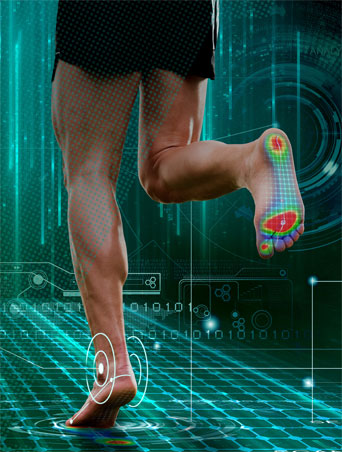 Together with MONDO, a leader in the supply and installation of sports surfaces and materials, several studies were conducted to relate sports surfaces with football boots in order to prevent injury and raise awareness for the correct use of this footwear depending on the surface.

The leading French footwear company developed a project with Podoactiva to supply insoles to its customers with increased comfort and improved dynamic response, to differentiate themselves from the competition.

Inycom, a company with a solid national presence and a technological partner of Podoactiva, has developed an ambitious project jointly with Podoactiva. In this project the entire value chain process is recorded in a single system, so that the patient’s information and the results obtained can be used to improve future diagnoses by giving guidance to specialists based on the over 300,000 cases treated.

Projects dedicated to studying patient ergonomics when seated with the manufacture of the corresponding custom treatment in collaboration with Centro Zaragoza.

Podoactiva collaborated in a project funded by the Regional Government of Aragón to design and manufacture custom backrests for drivers in order to reduce impact and injuries to people involved in traffic accidents. Virtual simulations showed that a custom backrest is effective for significantly reducing the seriousness of injuries. ‘Podoactiva Body Posture’ posture analysis system. Using its proprietary Younext 4D system, developed by the Podoactiva engineering department, this system can analyse the patient’s posture, obtaining the necessary measurements to complement biomechanical foot strike studies.

EUROSTARS European project with the Turkish company +90 and IBV to develop a technology that allows treatments to be manufactured more quickly and using automation.

In this two-year research project the software used by podiatrists in consultations was improved and new 3D printing and sintering technologies were evaluated for creating the base of the insole. It was also confirmed by the corresponding technical tests that the Podoactiva’s current insole (Dynamic) compared to these new techniques that will eventually take over has excellent elasticity and durability features, The scope of the project also allowed testing the new sintering materials on patients, with outstanding results.

The project with the department of Dr. Manuel Doblaré, which was developed with Podoactiva under the direction of Javier Bayod, represented a milestone in the incorporation of patient dynamics in the calculation of insole geometry using the information provided by baropodometric pressure platforms in foot strike studies.

CLOUDSME European project, part of the 7 FRAMEWORK PROGRAMME, for the development of applied technologies on cloud computing. European consortium formed by 15 European partners (universities and private companies) together with the Spanish partners Inycom and BIFI.

The second European project in which Podoactiva has participated focused on the development of cloud-based applications for podiatrists. The aim was to improve patient care in terms of the display and validation of the parameters needed to manufacture the insole and thereby avoid incidents related with the prescription of treatments. The work was done jointly with Ingecon, Bifi and other European cloud computing providers in the consortium. In the two years of the project it was possible to synchronise all Podoactiva’s ERP tasks on the servers created in the project and thereby provide the required information in a timely manner. This would have been impossible without the technology provided by the project partners, which greatly accelerated the calculation processes.