partners has gathered this weekend 250 over professionals of the world of podiatry and biomechanics in its IX National Congress Podoactiva held at the Walqa Technology Park in Huesca.

The congress began with thefamily photo” of all the workers in which he was present Arturo Aliaga, Vice President of the Government of Aragon and Minister of Industry, Competitiveness and Business Development, and Louis Philippe Serrate, Mayor of Huesca.

Here at the  Friday day, before the authorities officially opened the meeting, the Podoactiva professionals, coming from all parts of Spain and several foreign countries, came to the Headquarters of Podoactiva where several visits were made to the Podoactiva Central Building, since several spaces have been renovated, such as the Department of Marketing and Communication, and the Department of Training and Research, which now has a new classroom where classes are given to new professionals in Podoactive. 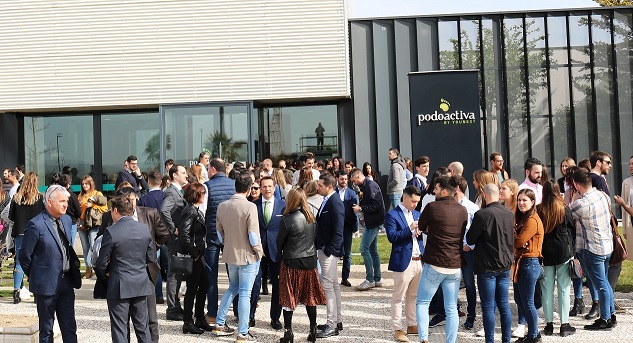 They also toured the Podoactiva 2 Building facilities, which is characterized by being the most modern custom insole production plant in the world.

So, after the "family photo", the whole team went to the Felix de Azara Building of the Walqa Technology Park, whose entrance was decorated for the occasion, highlighting the “Podoactiva green carpet”. 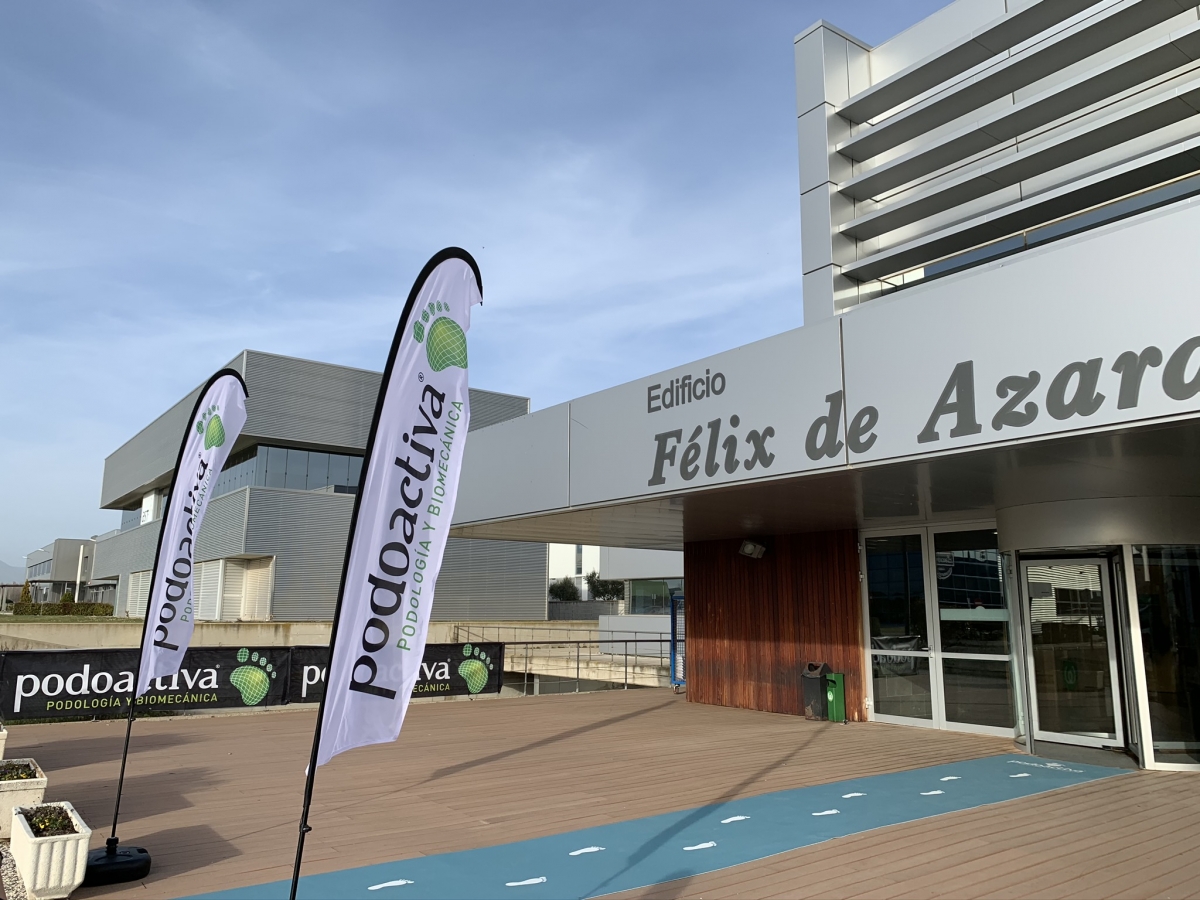 As a novelty, those present, before starting with the interventions, were given the "congressman's kit” so that during the informative sessions on Saturday they could take their notes. Also included in this kit was the number 4 of the magazine "Tread well, live better" whose protagonist is Fernando Torres. 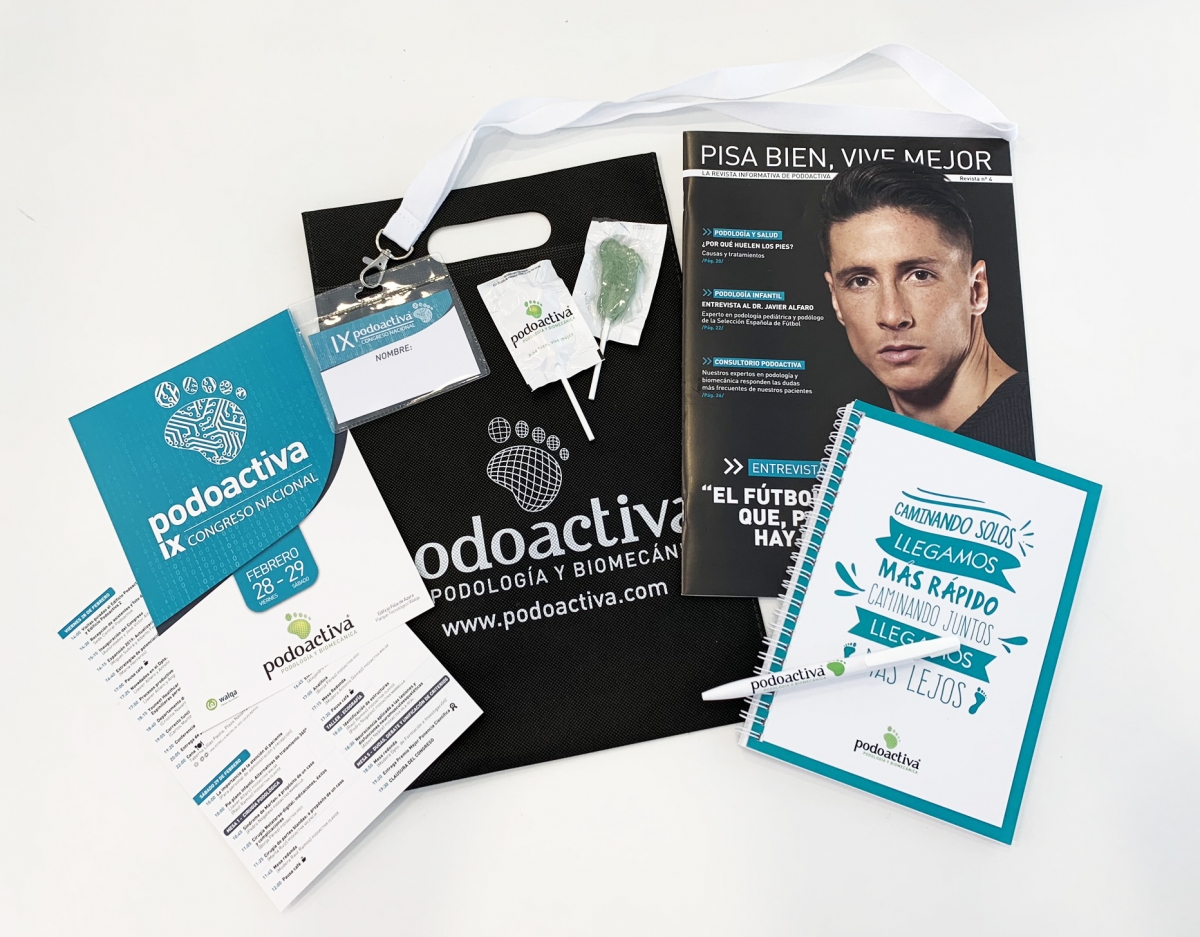 At the opening of the congress, the vice president Arturo Aliaga stressed that "Podoactiva has become a international reference company Thanks to the great team that you all form. Full capacity today in this congress hall”. For its part, Louis Philippe Serrate, mayor of Huesca, congratulated the entire Podoactiva family for all the projects they have carried out and thanked them for continuing to bet on Huesca. 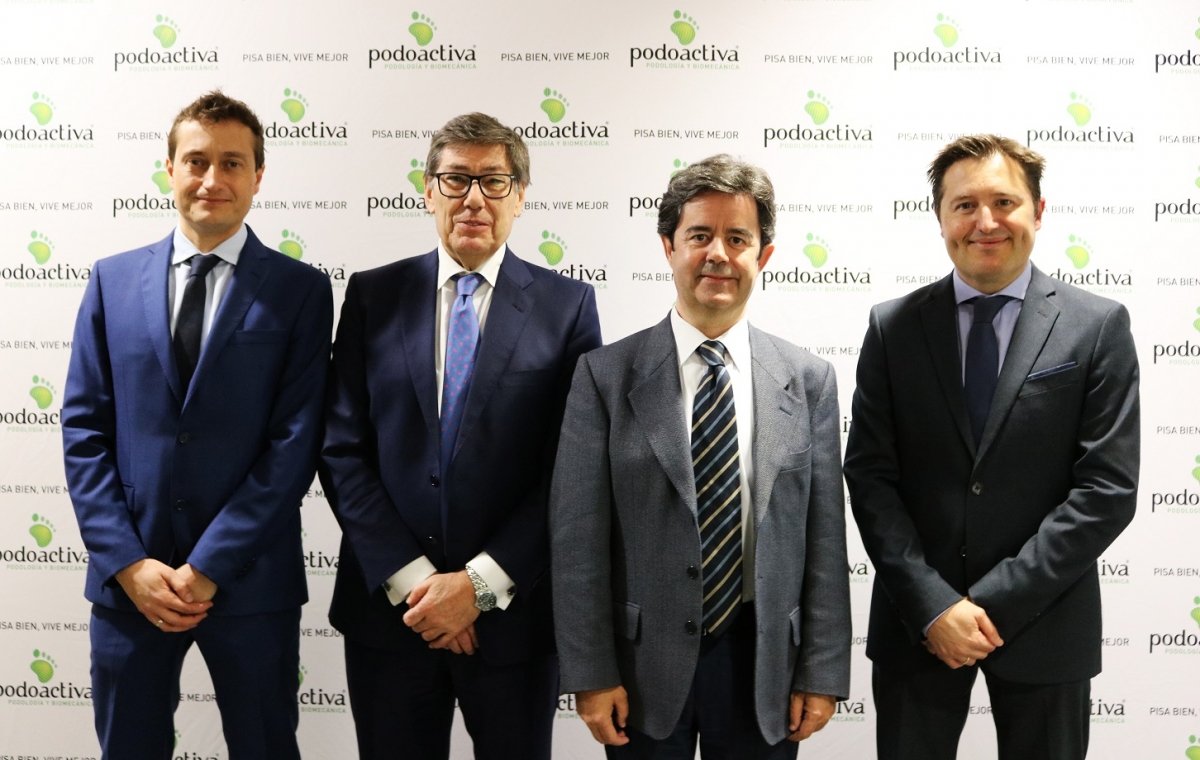 The Podoactiva National Congress is the most important annual event of the organization since it brings together a team of more than 250 people.

After the intervention of the authorities, Victor Alfaro, CEO of Podoactiva, reviewed the most important milestones of the organization and exposed the future objectives of the company from Huesca. “2019 has been the year of greatest growth for Podoactiva to date and we believe we have laid the foundation for solid growth in the coming years,” Alfaro said. 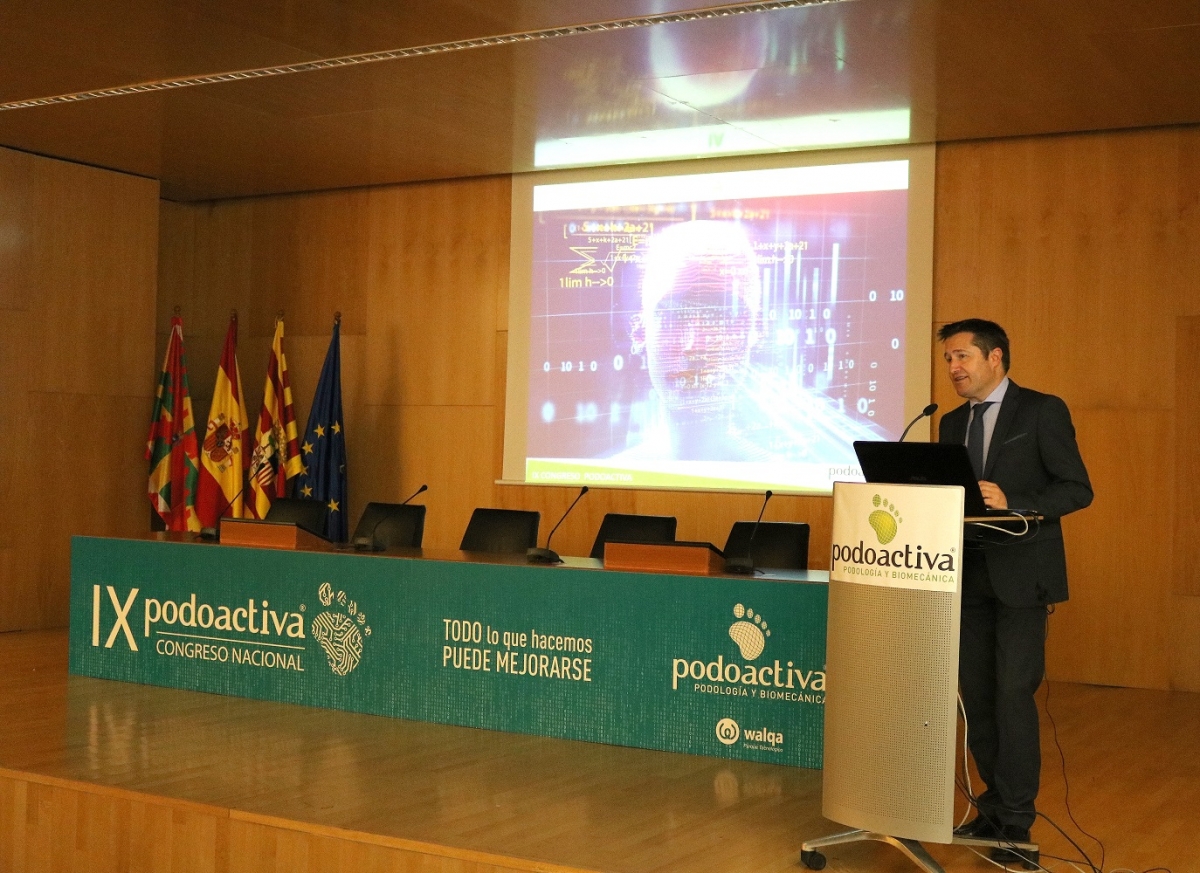 The CEO explained that “throughout 2020 marketing will start Smart Insole Podoactiva, being the world's first smart custom template, a milestone that places us at the world forefront of biomechanics applied to walking”. In addition, Víctor Alfaro did not forget the most important thing, "the more than 500.000 patients who have trusted us. They are the ones who drive us every day and make us continue to improve. As I always say, they are our reason for being”.

He also wanted to highlight that "throughout this year we are going to work on a project that we are very excited about: the start-up of the year 2021 of the "Podoactiva Podiatry University Center”, as a center attached to the University of Zaragoza".

Víctor Alfaro highlighted the launch of the Podoactiva University Podiatry Center, "a project with which we want to train the reference professionals of the future" 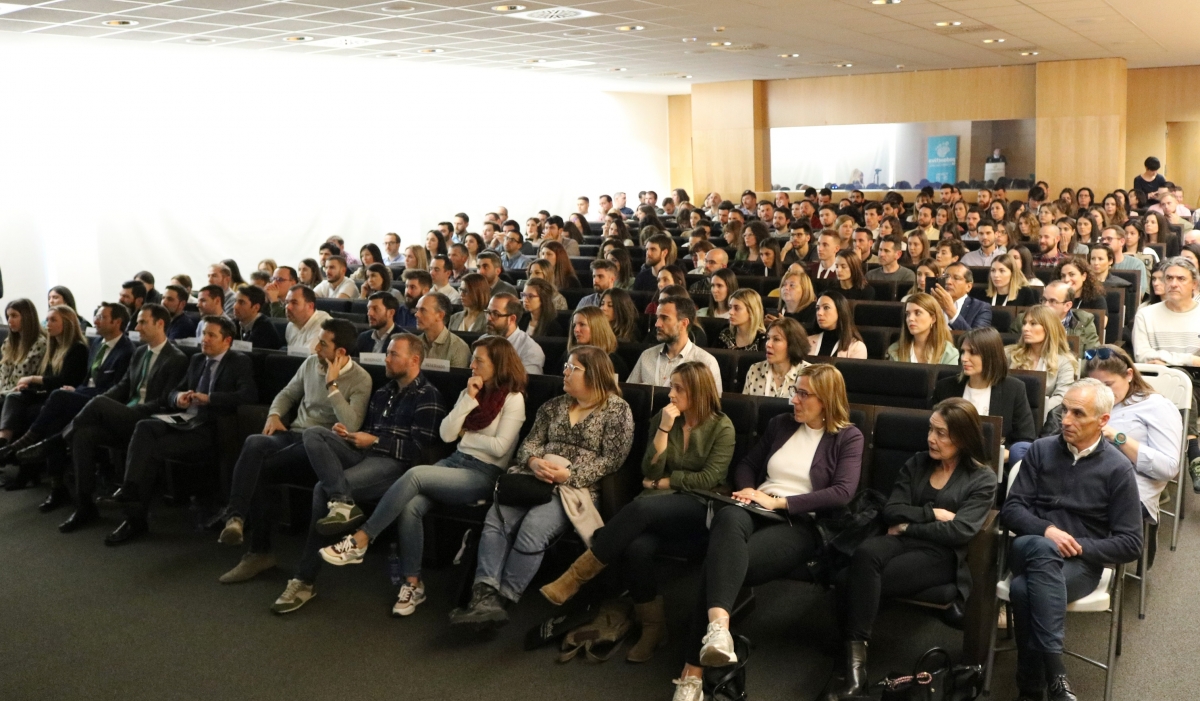 Miguel will go up, manager of Podoactiva, and Alberto Fernández, director of expansion of the organization, presented the novelties at a national and international level. “We have 19 Podoactiva clinics at street level and 171 Podoactiva Units in reference hospital centers, but in 2020 we are going to carry out new projects in different cities”, Subirá affirmed. Alberto Fernández indicated “that we are in full growth, but we always maintain our objectives, which are none other than caring for and improving the quality of life of our patients". 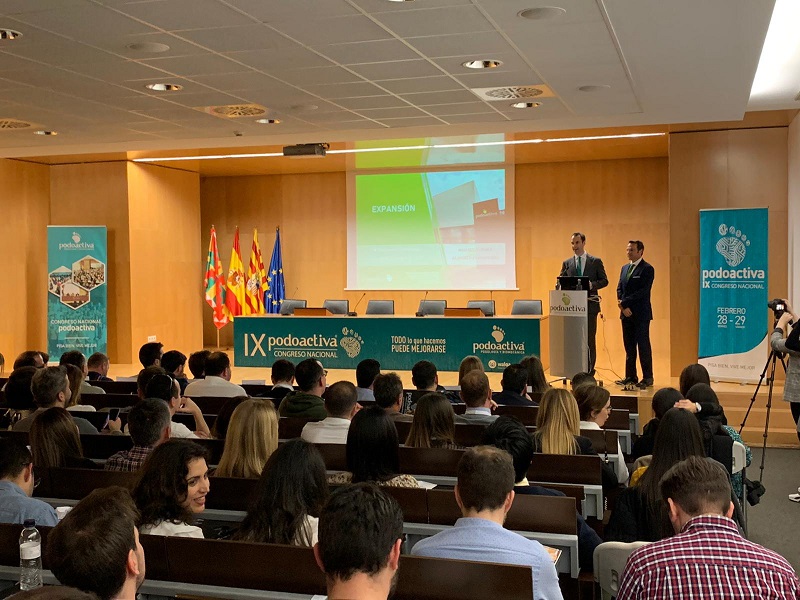 Maria Herreros, head of the Development Department, explained several of the keys with which the success of the new centers opened in 2019 has been achieved, highlighting that "the main asset of our company are the professionals who are part of the equipment. Going all in the same direction is fundamental and that is what we are doing”. 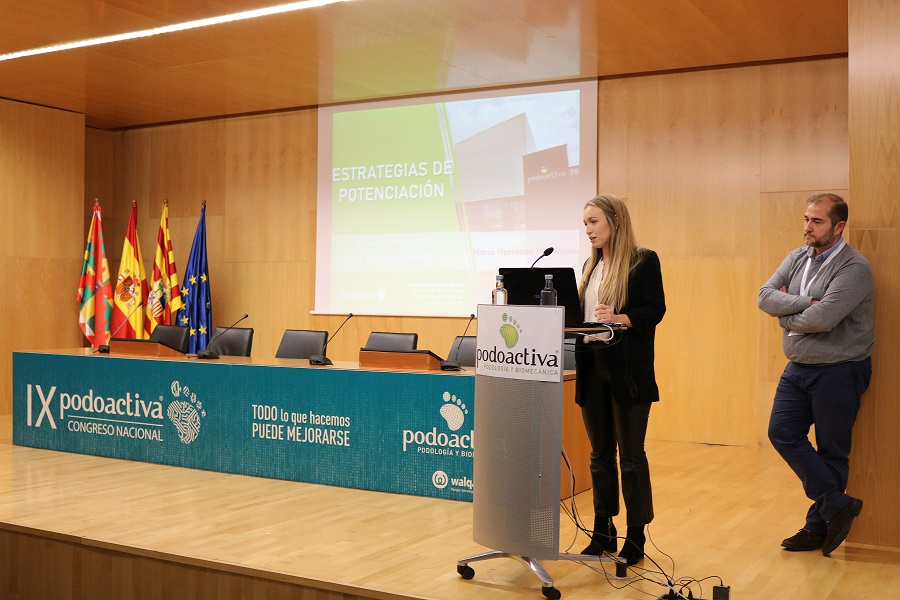 The news in the Training and Research Department was the central theme of the intervention of Javier alfaro, technical director and co-founder of Podoactiva, and Antonio Gómez, responsible for the Training and Research Department. Alfaro emphasized "the importance of training and research for the development of the career of all Podoactiva podiatrists. Are two fundamental pillars for us that we will continue betting on”. 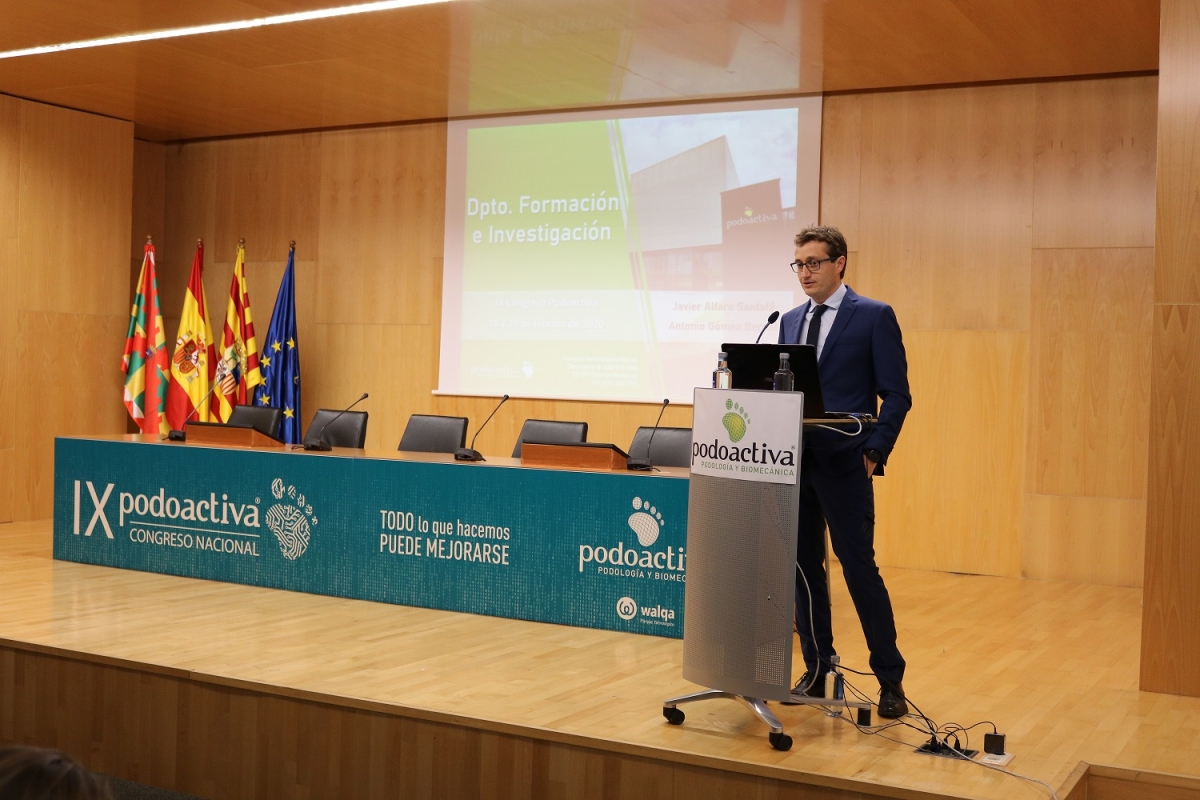 Javier alfaro also accompanied Ángel Peguero, head of R+D+i of the company in his presentation on “Productive processes” in which he reiterated that “Podoactiva has the most modern manufacturing plant in the world de custom templates". 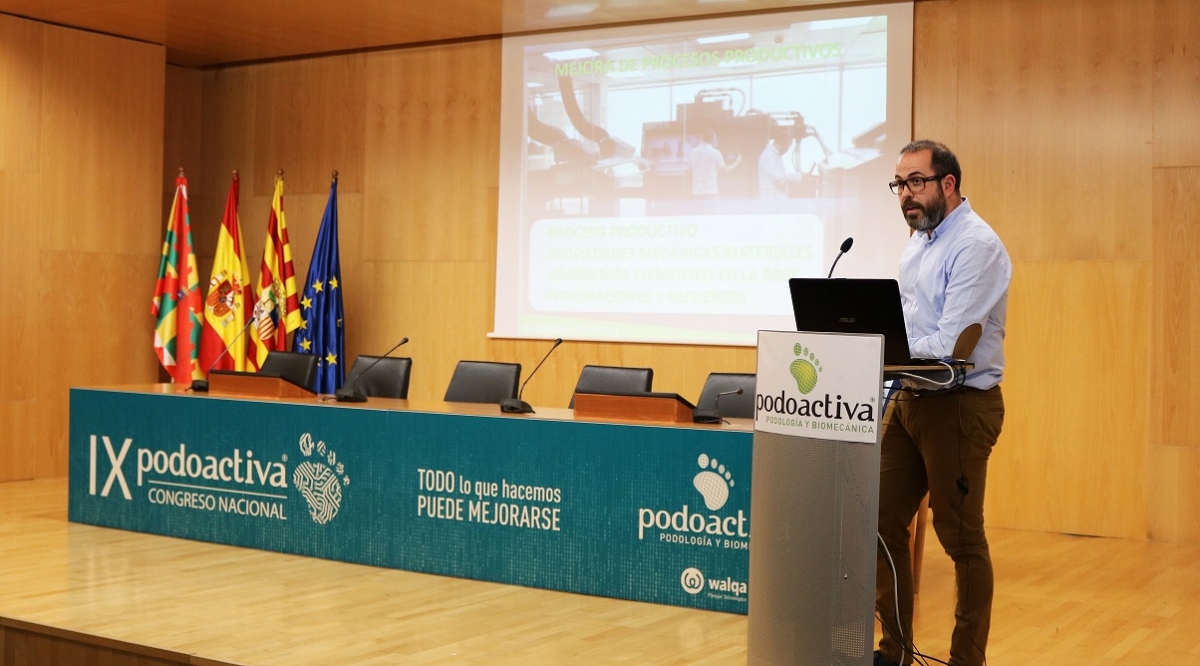 Marina Azpiroz, responsible of Younext Healthcare, and Diego Garcia, responsible of Younext Football Protection, They talked about the customized solutions they make with 3D processes thanks to the collaboration with the Miguel Sevet University Hospital in Zaragoza and also the custom shin guards brand Younext Football Protection that stand out for the comfort, lightness and quality of the materials. Behind them, Eloy Monesma and Cristina Navarro, of Department of Communication and Marketing, They exposed the importance of communication within an organization. 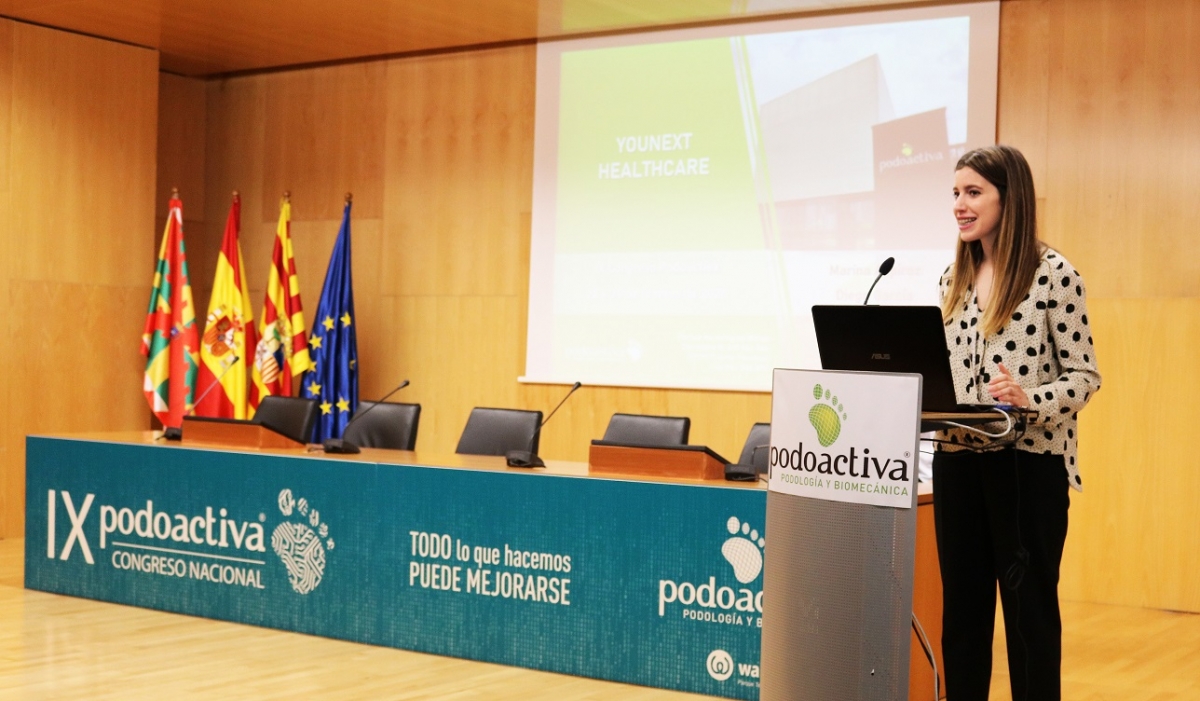 Friday was a corporate day aimed at all employees, both podiatrists and workshop staff, administration and the different departments.

Carlos Martín, the clinical director of Podoactiva Sagastaspoke about the "Correct functioning of a Podoactiva Clinic”. It should be noted that, in the last congress, this center was awarded with the award for "Best Podoactiva Clinic 2018". 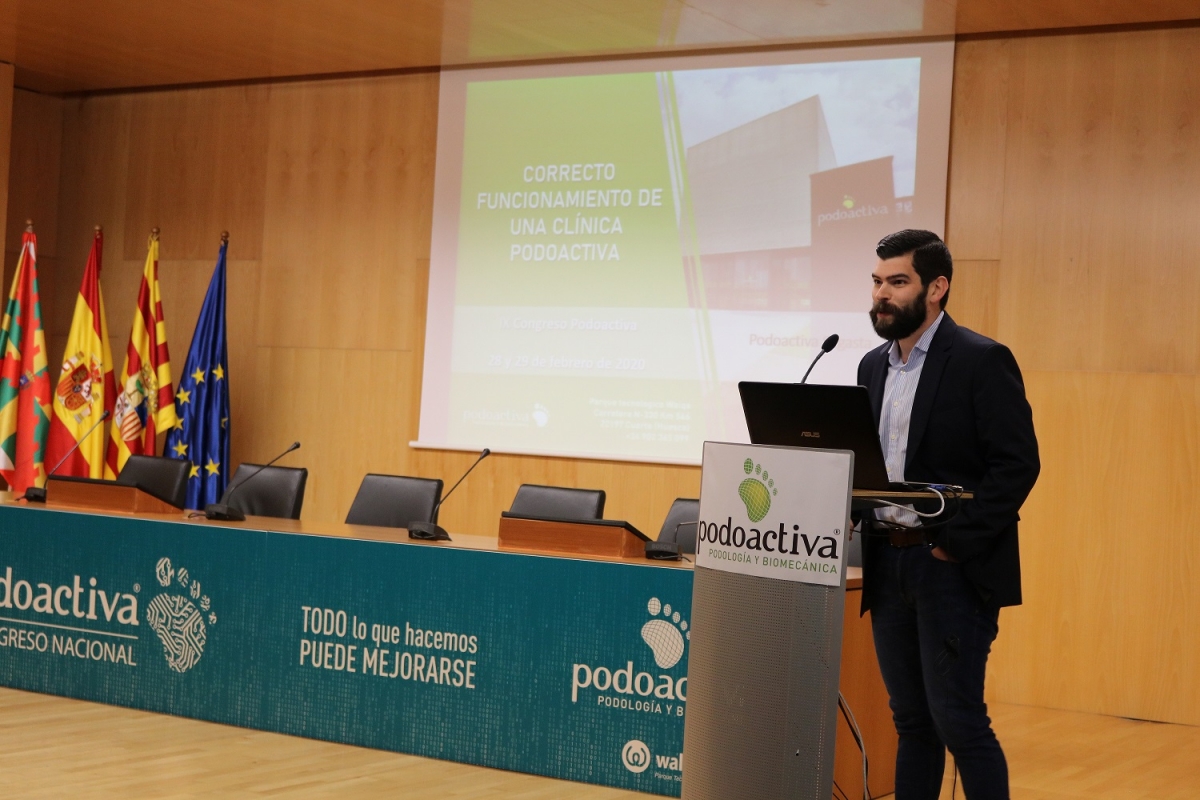 In this ninth edition, the special guest was Fede de Juan, comedian and screenwriter, who made a fun colloquium with character impressions relevant on the national scene. “It is a pleasure to accompany you today at the Podoactiva congress”, he commented at the beginning of his speech before a fully booked auditorium. 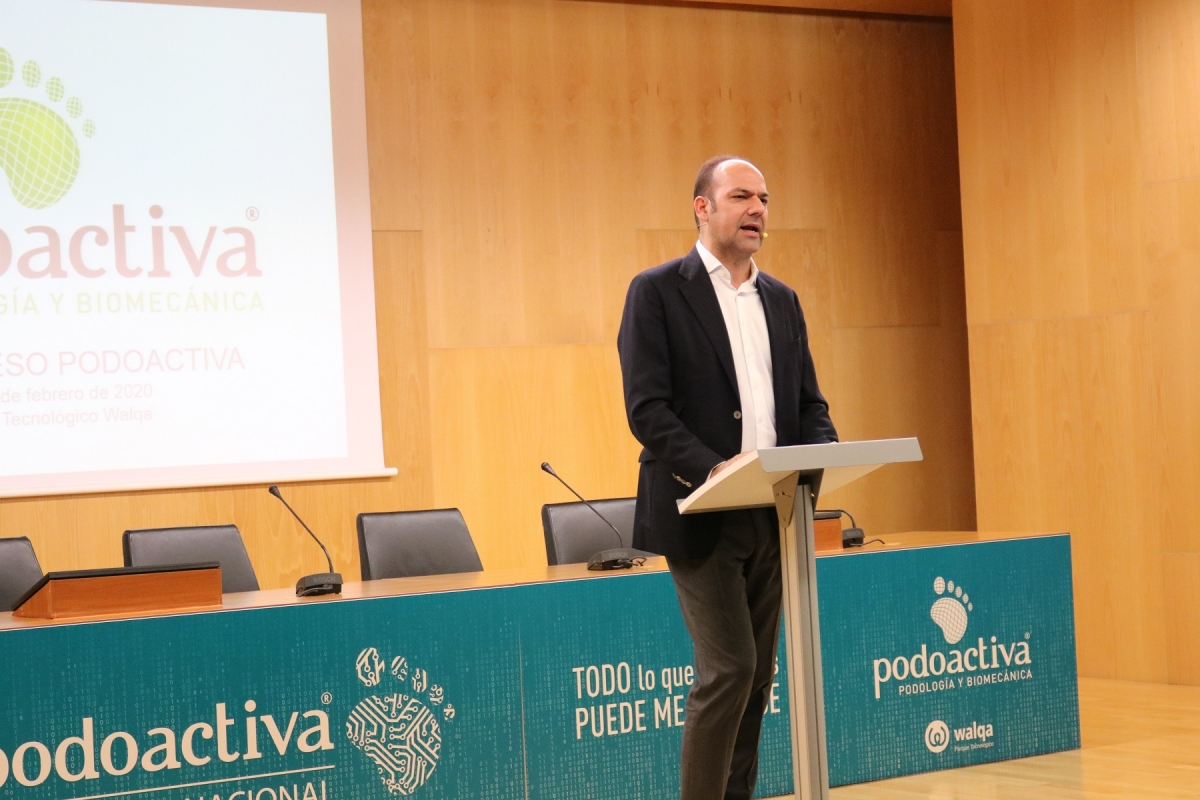 Faith of John He also served as master of ceremonies at the awards. First, it was delivered lifetime achievement recognition for 10 Podoactiva employees for their 10 years within the organization. 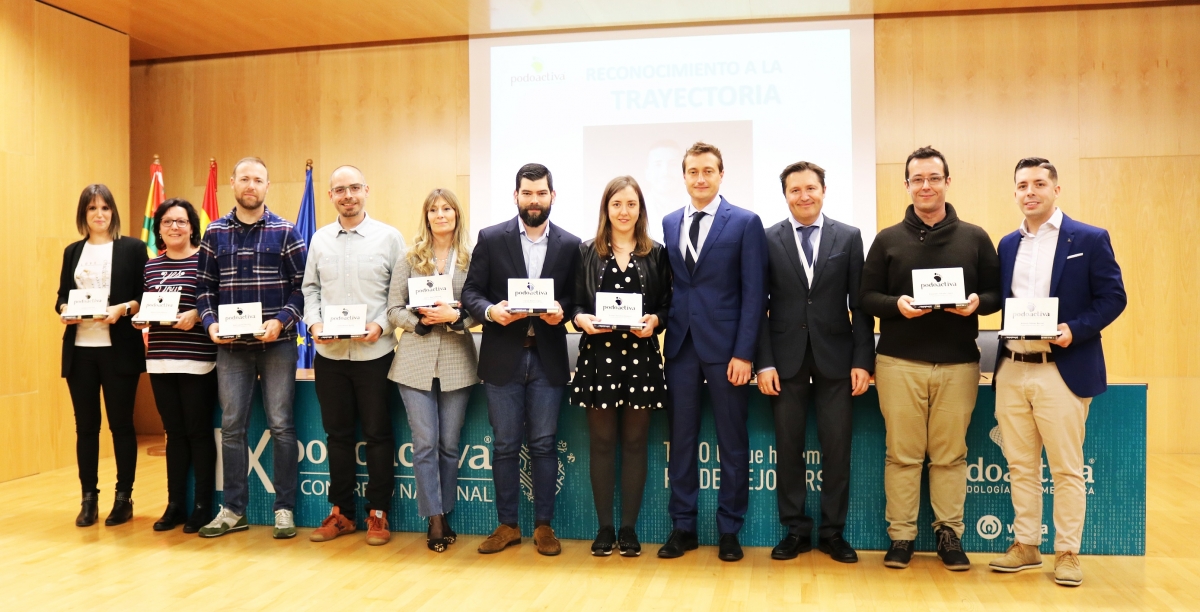 After that, the awards ceremony began, with that of “Podiatric dissemination” which was, another year, for Sagasta Podoactiva Clinic de Zaragoza. 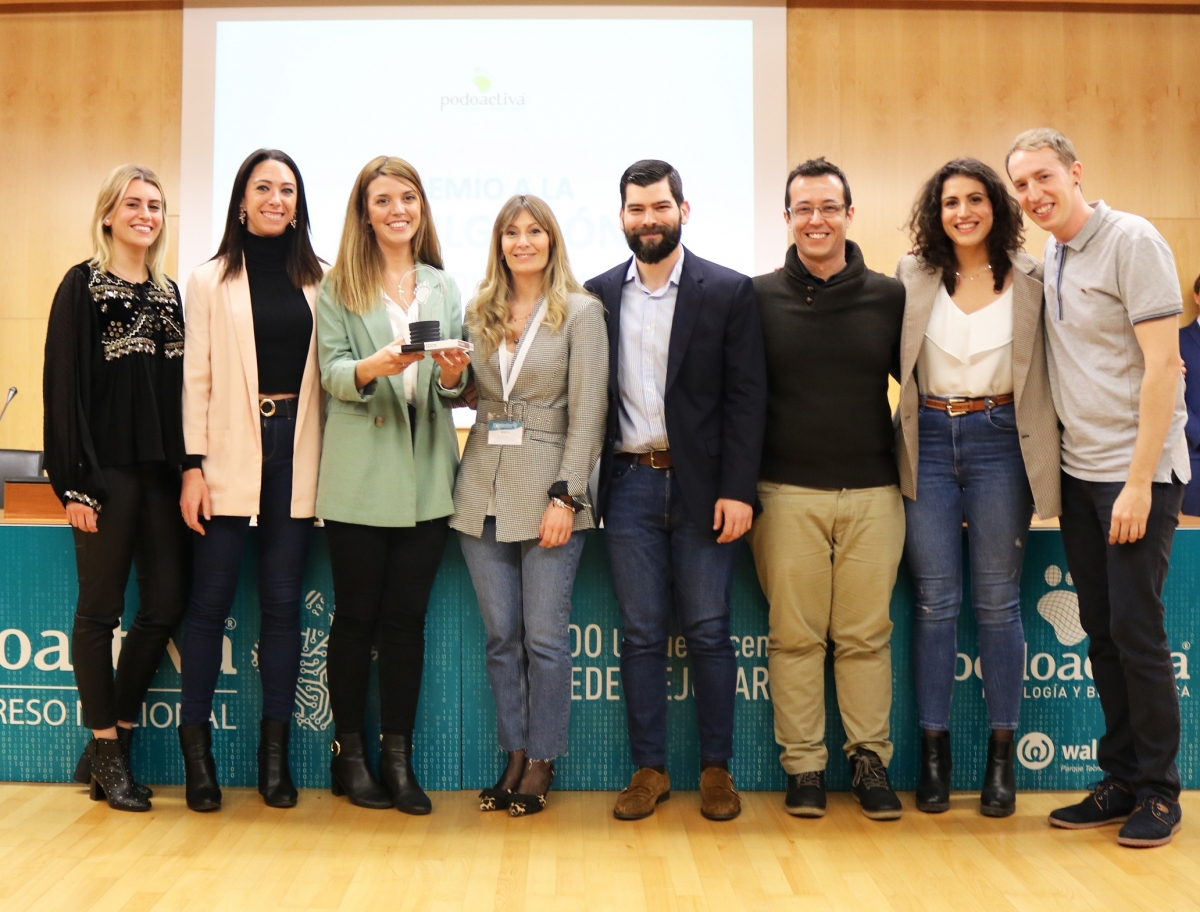 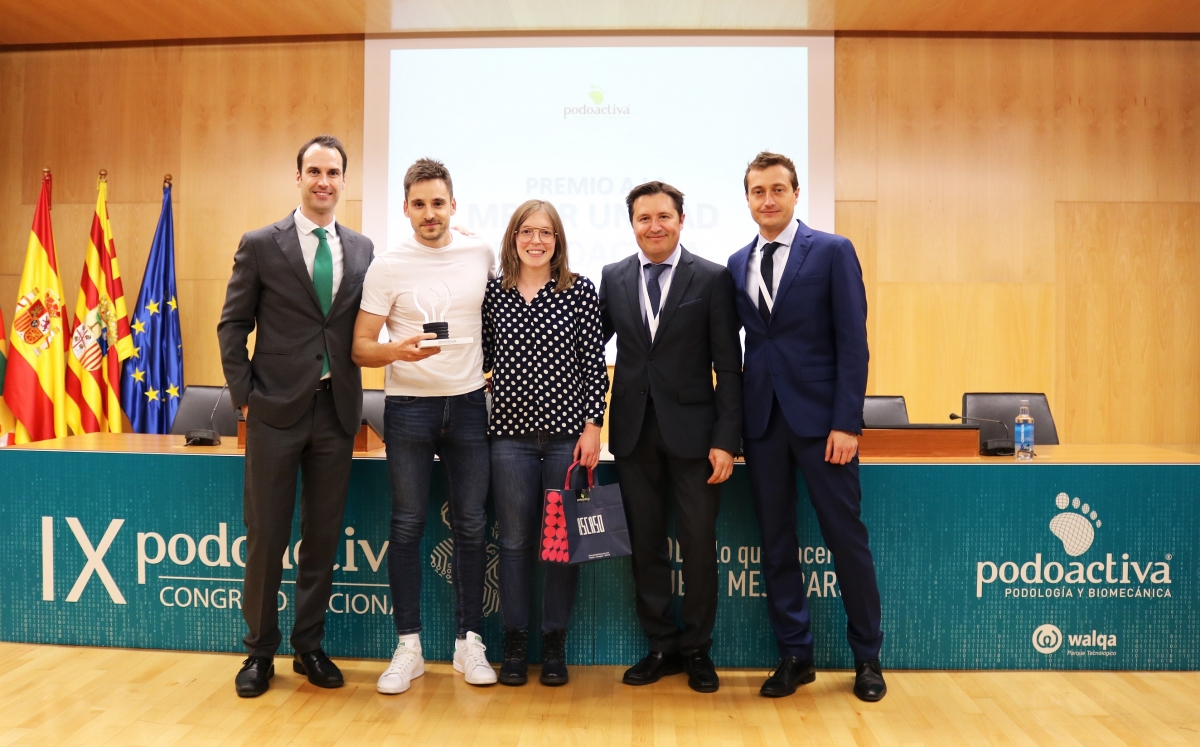 The "Best Podologist Podoactiva 2019” he gave himself to Angela Pascual, a veteran within the firm who works in the Quiron Zaragoza Podoactiva Unit.

The award to "Best Podoactiva Clinic 2019" it was for Podoactiva Pozuelo Clinic led by podiatrist Esther Gonzalez. 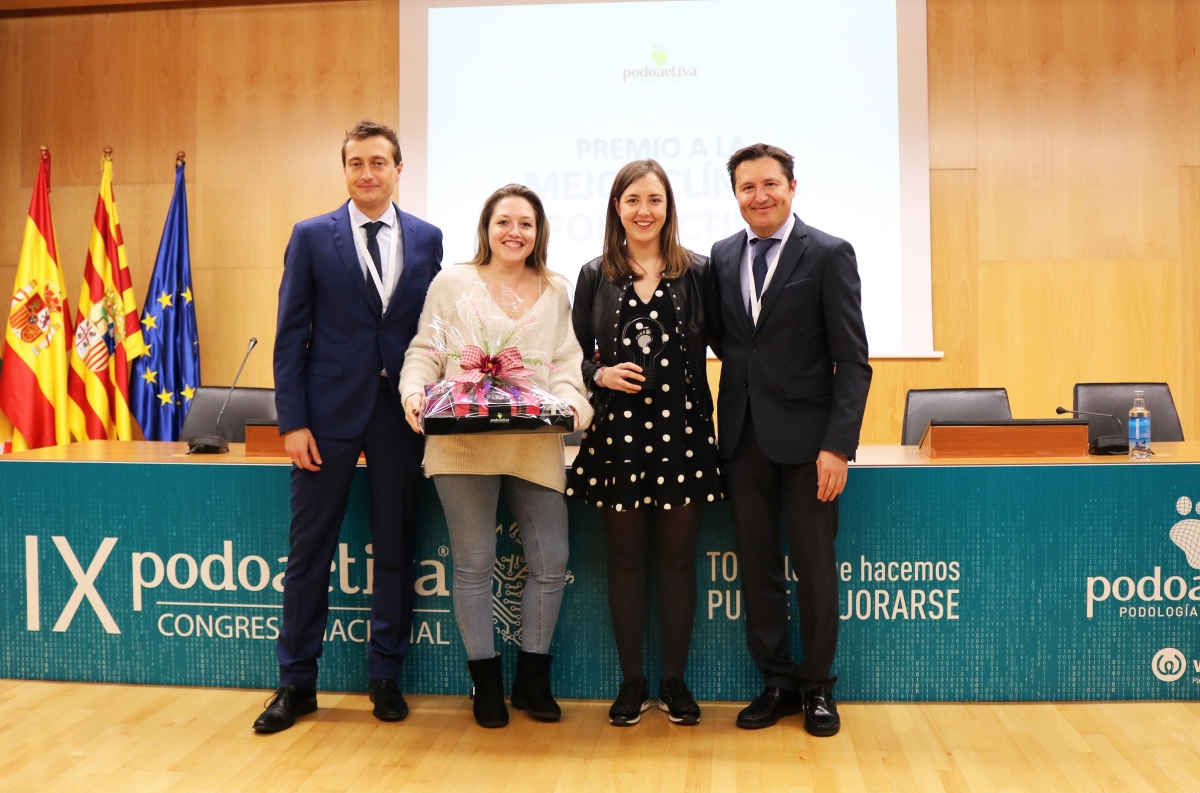 The final touch was the "Recognition of Podoactiva Human Values" for Peter Nogales, Podoactiva podiatrist in the Podoactive Foot Unit Nogales Premium Clinic in Marbella, which moved to Madagascar. All the info of this project here!. 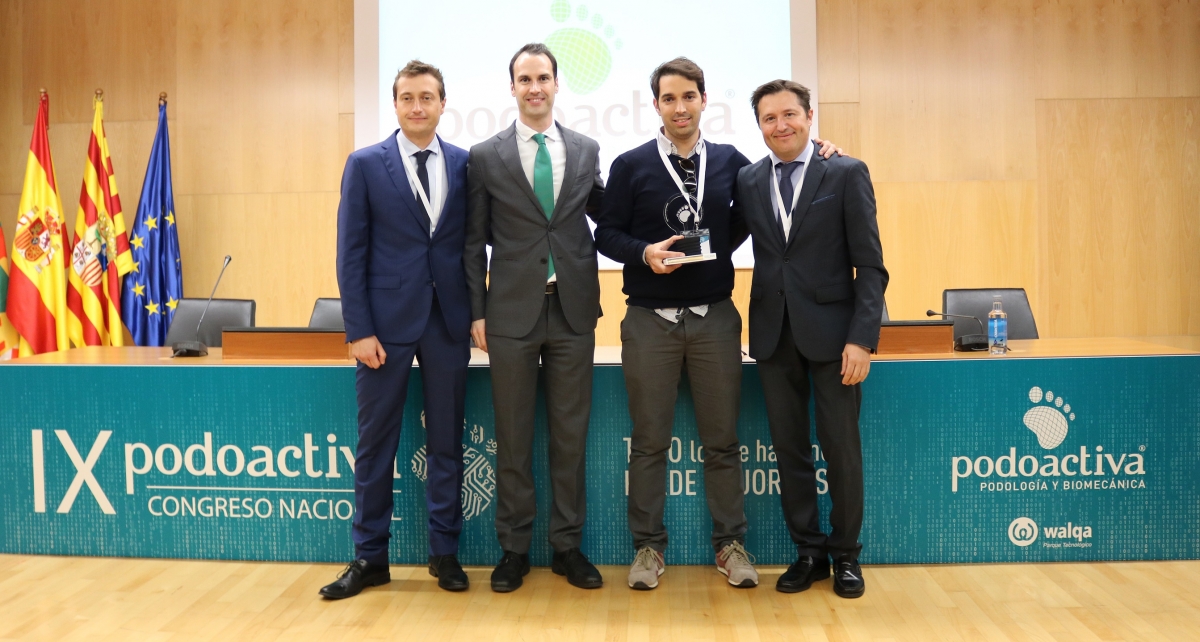 There was also an acknowledgment of theBetter idea” which was for the communication Department. The objective of this contest, as in previous editions, is to improve Podoactiva's day-to-day life by applying the proposals of the employees. 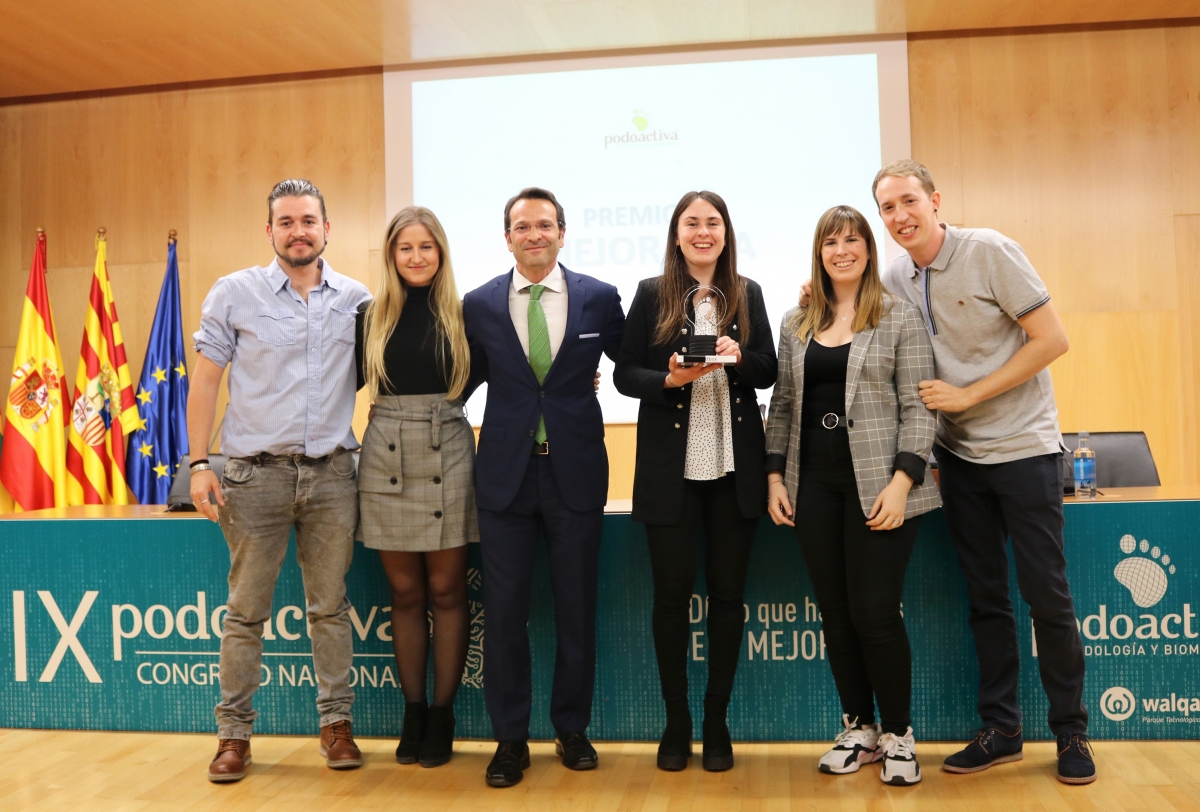 La Friday day closed with a cocktail Tavern Lillas Pastia, a restaurant that has a Michelin star and two Repsol Suns. 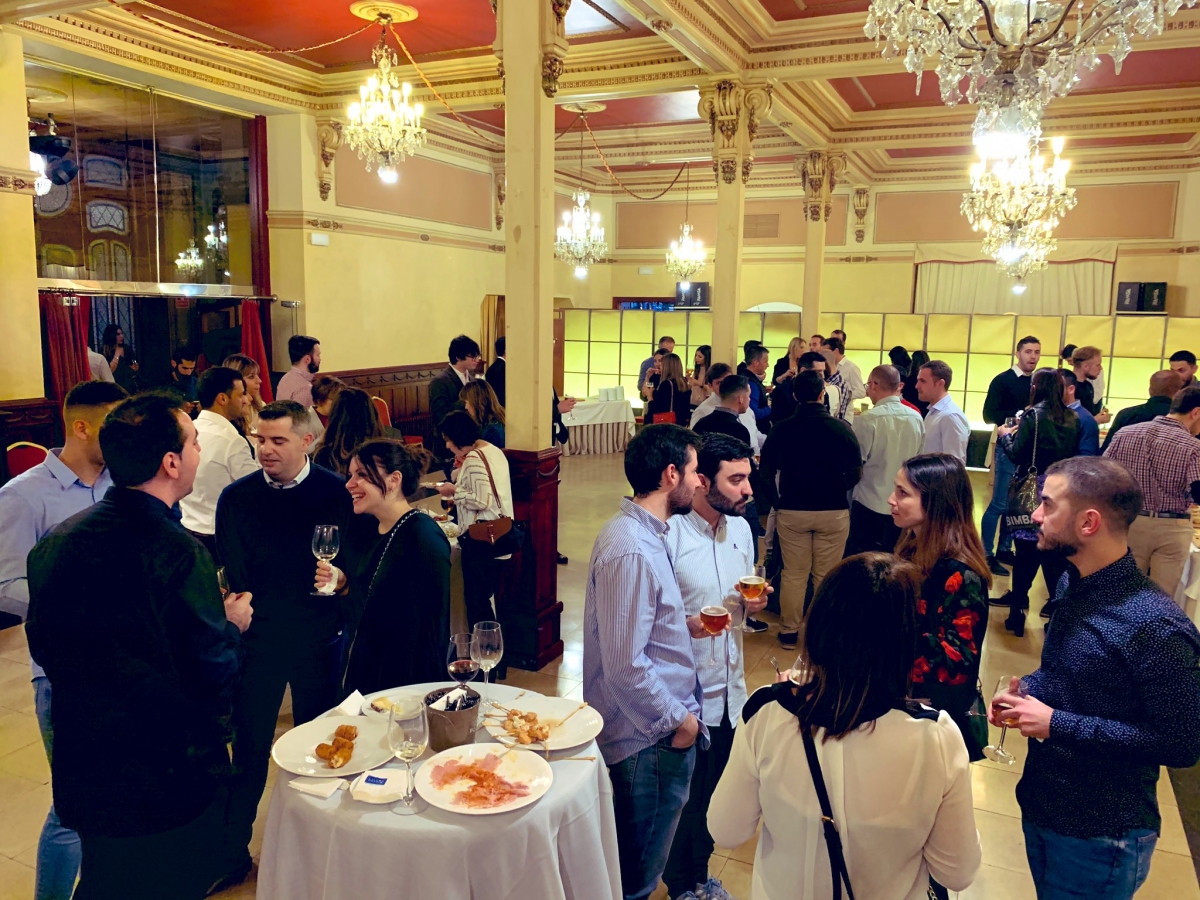 The first of the talks on Saturday was “The importance of patient care”, addressed to reception and administration staff of the Podoactiva Clinics in the Central Building of the Walqa Technology Park. 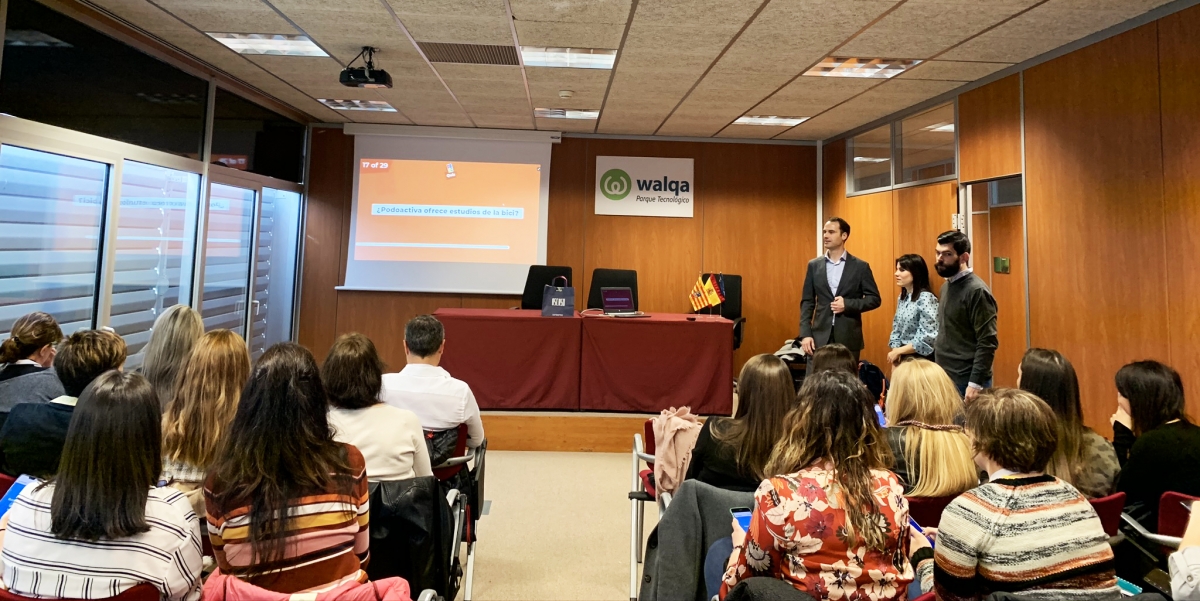 On the other hand, at the same time, Javier Alfaro and Raul Ramos de Podoactiva Olavide Clinic in Madrid, they gave the starting signal with their intervention on “Children's flat feet. 360º treatment alternatives". 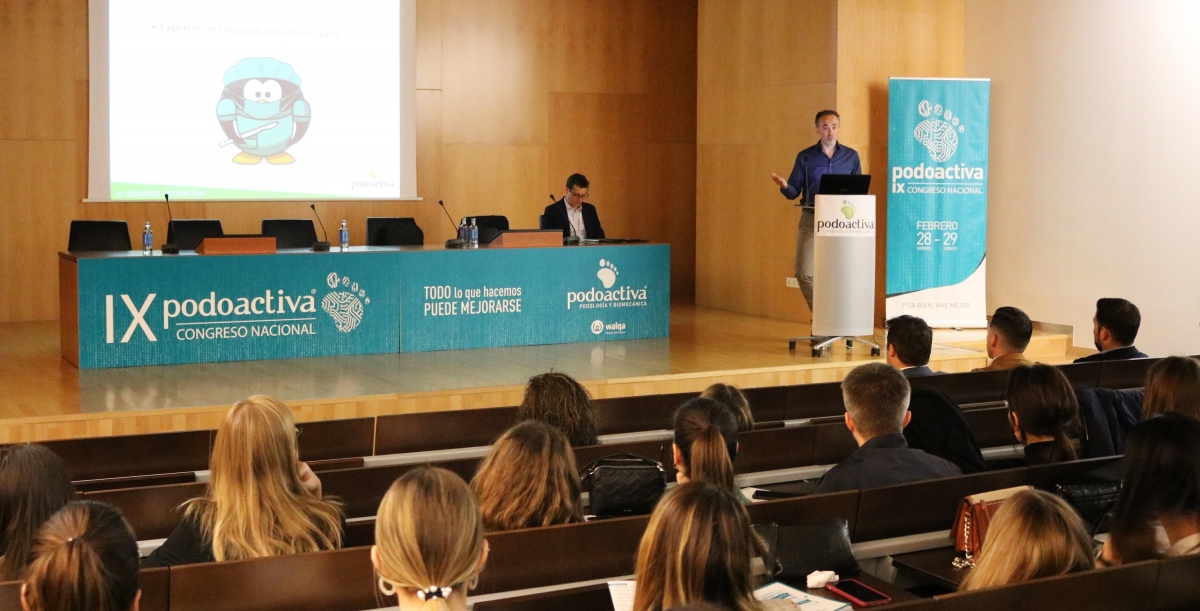 Behind them, the first table began on “Podiatric surgery” moderated by the expert Raul Ramos, in which three specialists in the field participated: Pedro Nogales, Borja Pérez and Marta Ruiz. 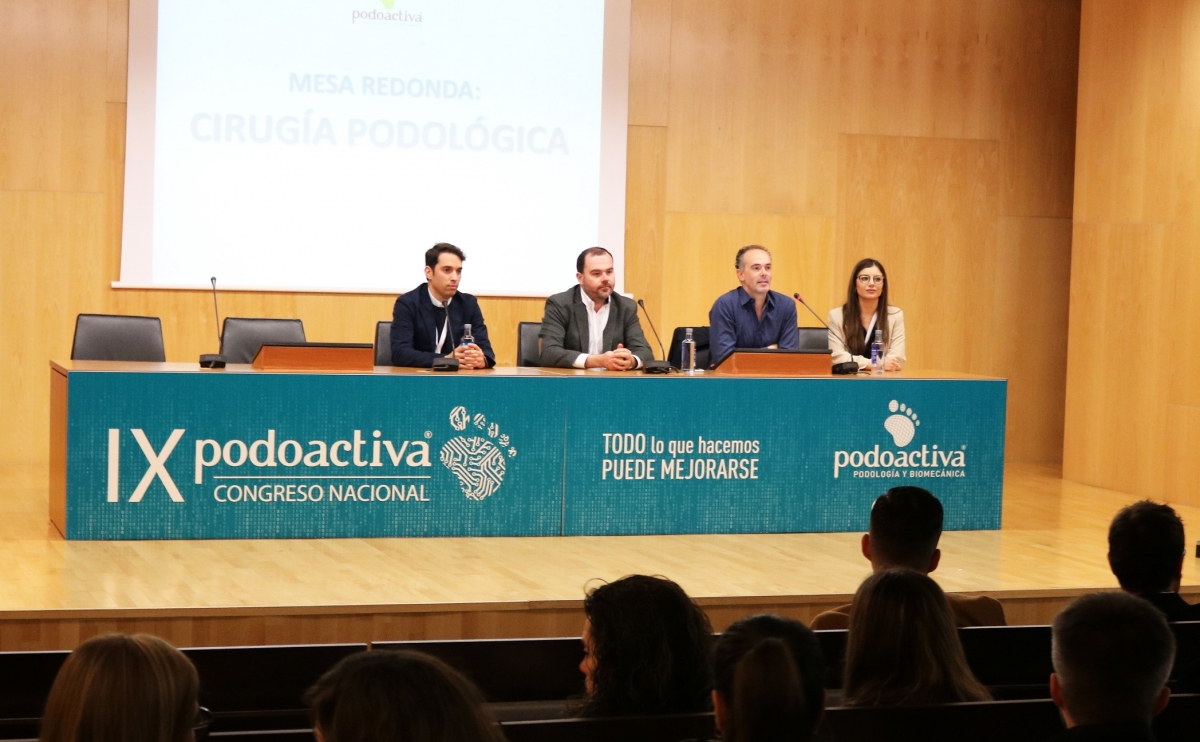 "Biomechanics and applied ortopology” was the central theme of the second table moderated by Carlos Martín which started after a coffee break. Antonio Gómez, Aitor Pérez, Javier del Río and Javier Alfaro were the speakers who presented the novelties of the different topics discussed. 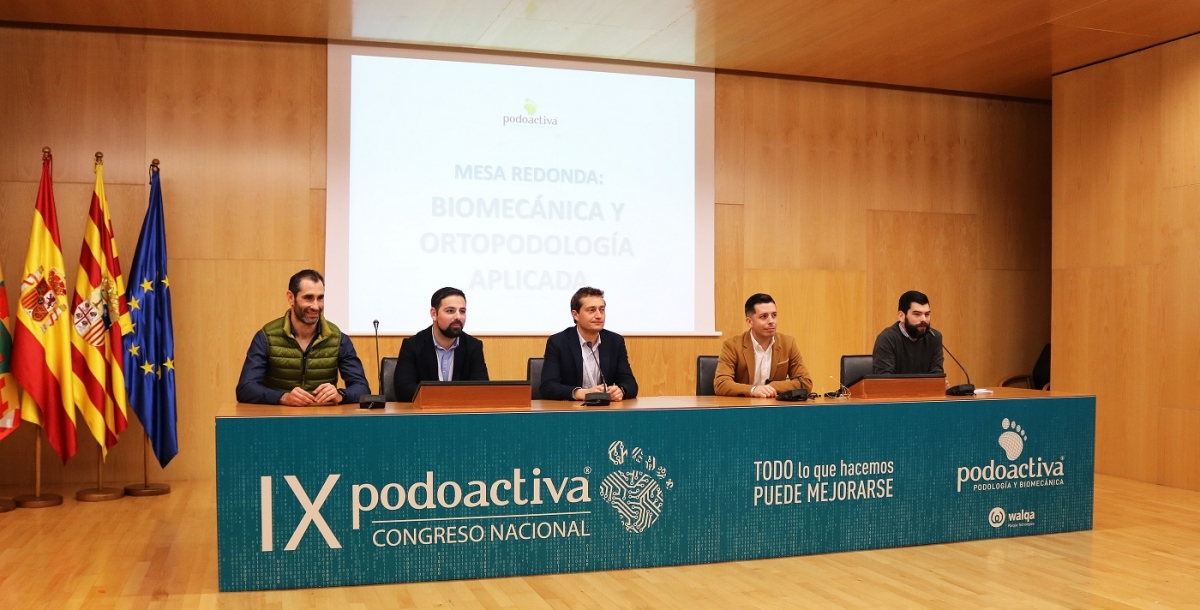 After a short debate, all the attendees regained their strength with a meal in the hall of the Félix de Azara Building in the Walqa Technology Park.

Podiatry, podiatric surgery and biomechanics were the central areas of the day on Saturday.

The afternoon started with third table of "Clinical applications". Carlos Dolz was in charge of opening it talking about “Asymmetries in children from 9 to 14 years old: descriptive”. After him, they exposed Sofia Laseo and Jennifer Garcia of Podoactiva Sagasta and Podoactiva Premier, respectively. 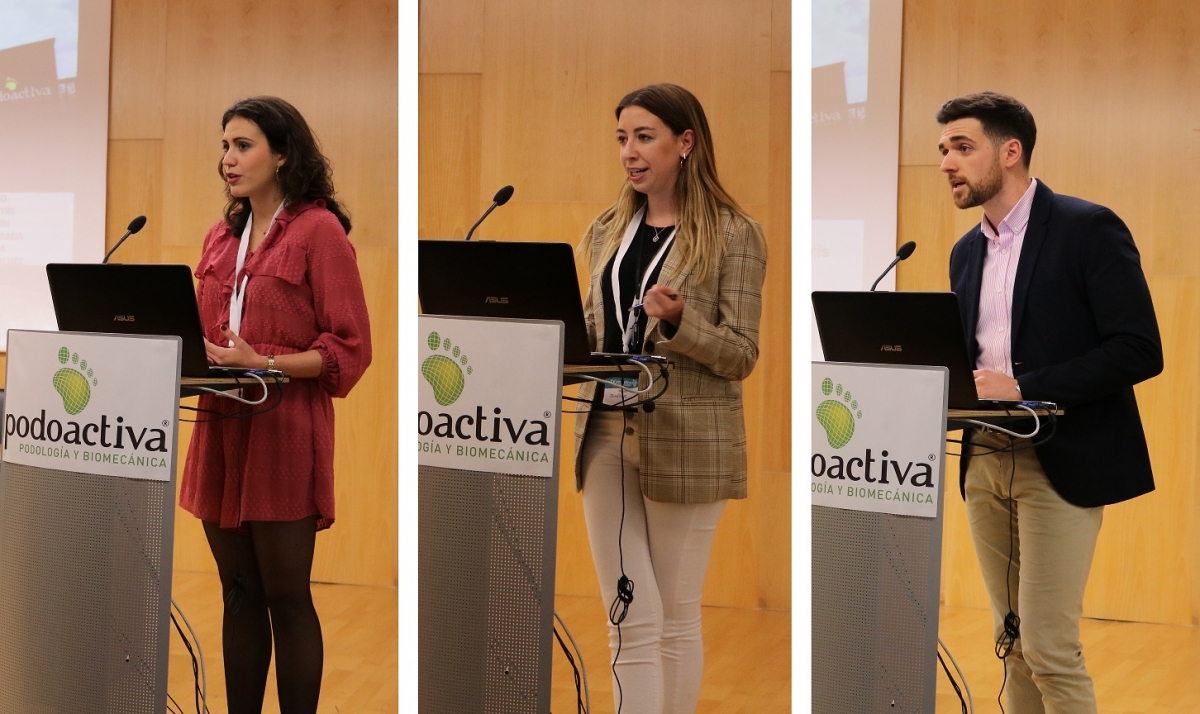 The patient and their quality of life is the most important thing for Podoactiva, and this is how it was transmitted in each of the interventions of the day.

Antonio Gómez moderated the fourth table on “Complementary tests: when to request them and interpretation”. Topics covered by experts Raul Ramos (“Simple radiology / CT / Gammagraphy”), Peter Nogales (“Ultrasound / MRI”), Alexander Almenar (“Electromyography / Thermography”) and Borja Pérez (“Analytics”) focused on the Importance of consulting with specialists from other disciplines to perform a diagnosis as accurate as possible. 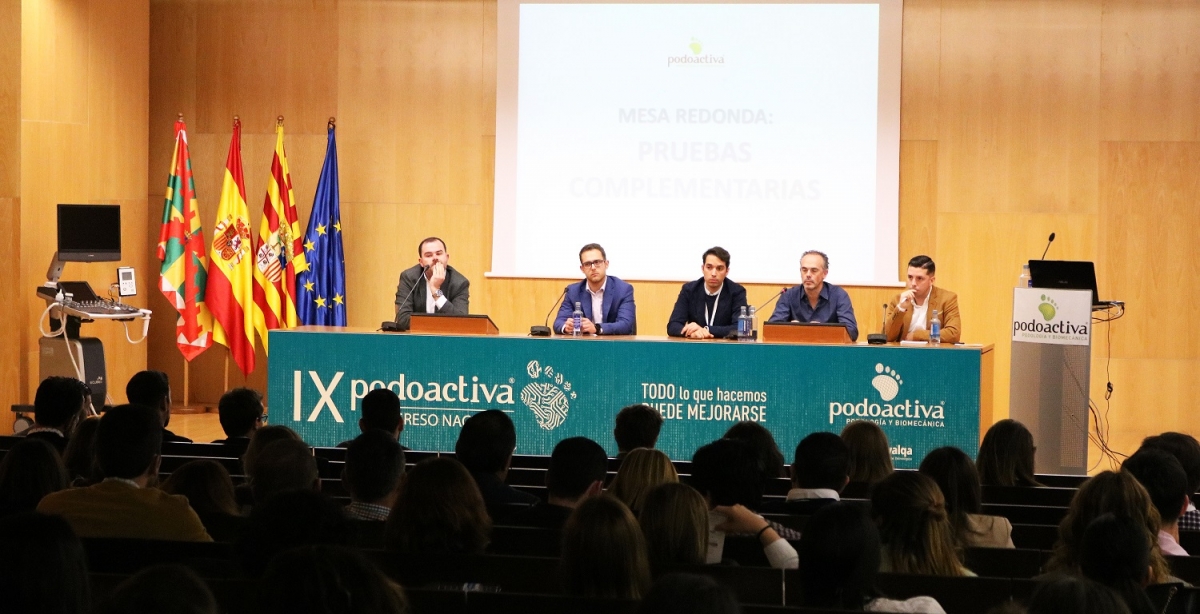 La Saturday session continued with a novelty: the ultrasound workshop, in which the protagonists, due to their extensive experience in the matter, were Raul Ramos, Pedro Nogales and Albert Nebra. “The new ultrasound machines that we are launching at Podoactiva give us the possibility of treating the different pathologies with which our patients come to the consultation much better. This is the latest technology on the market,” Ramos said. 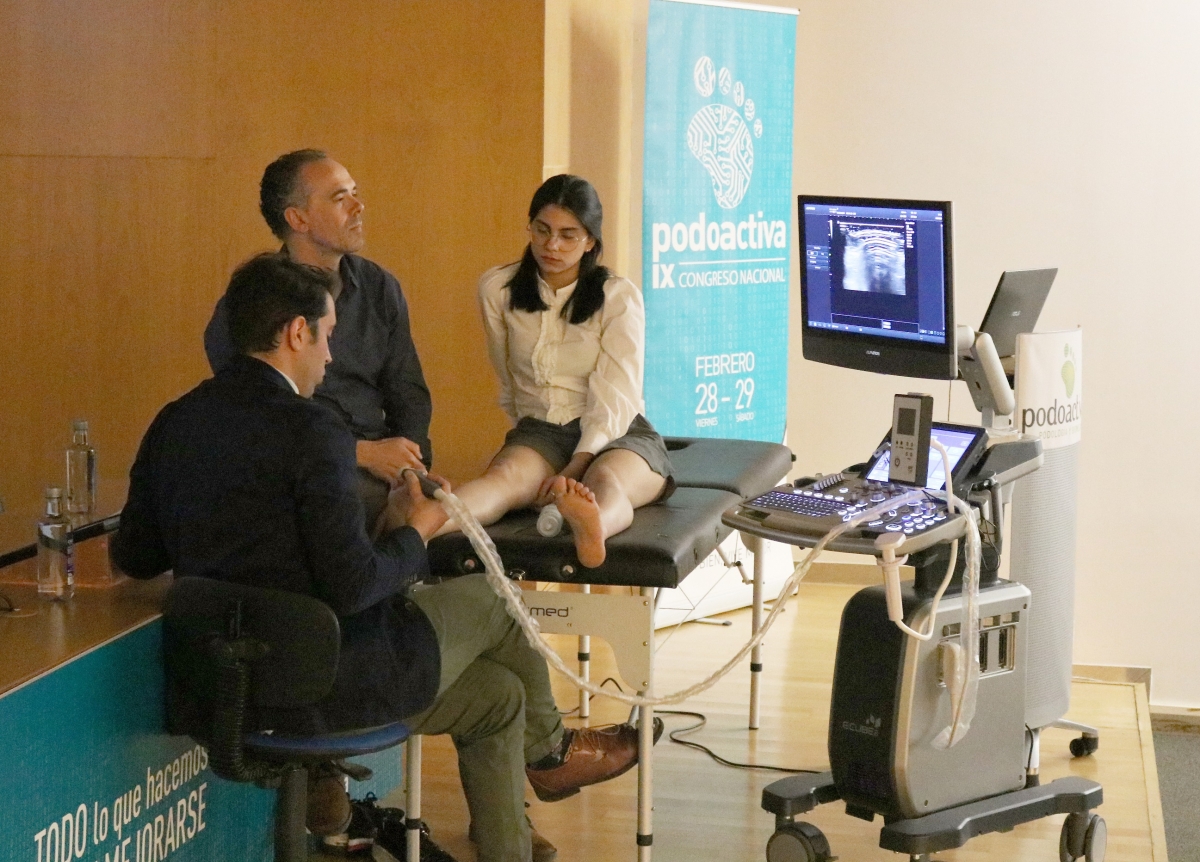 Improving treatments thanks to the knowledge exposed in the presentations was the main objective of the five tables of the IX National Podoactiva Congress.

The congress reached its final stretch with the fifth and last table of “Doubts, debate and unification of criteria”. Those in charge of moderating it were the Podoactiva experts who make up the Department of Training and Research of the company.

Víctor Alfaro was in charge of closing the congress by delivering the Award for "Best scientific paper", an award that was given to Anthony Gomez, head of the Podoactiva research department. 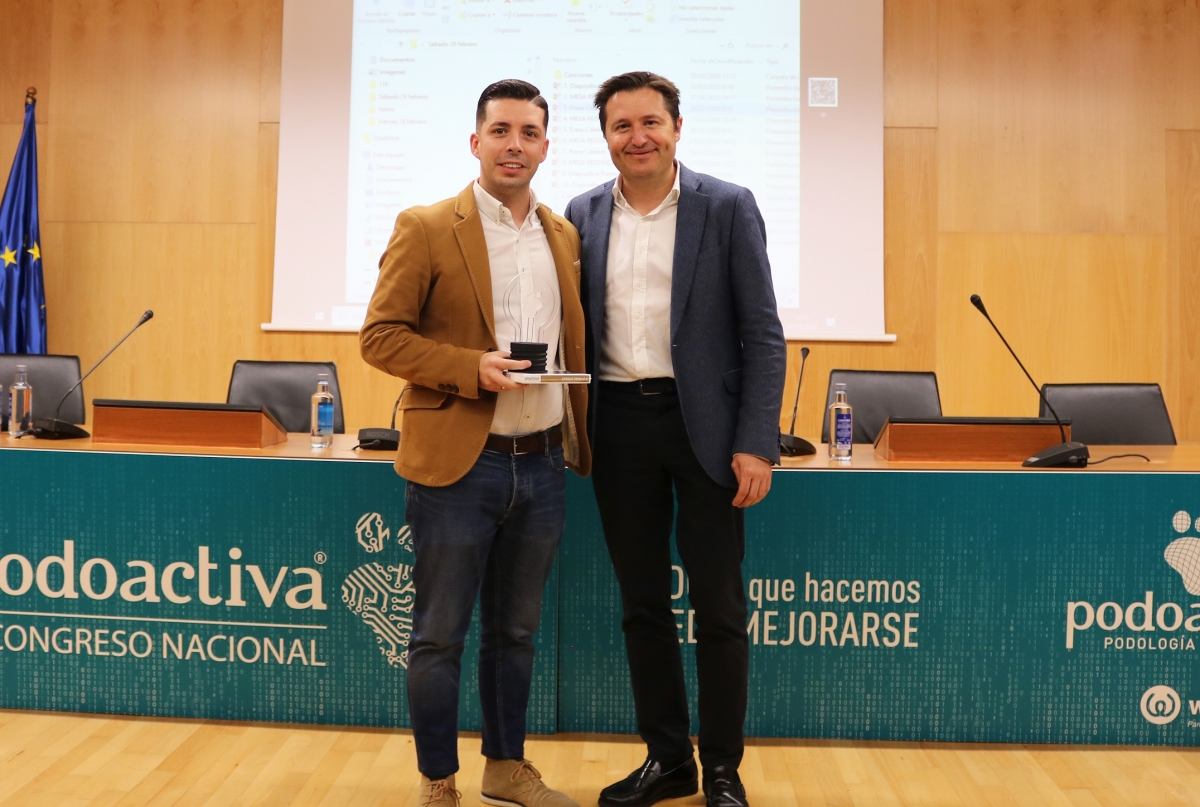 Many thanks to the entire team for attending the IX Podoactiva National Congress... See you in 2021! 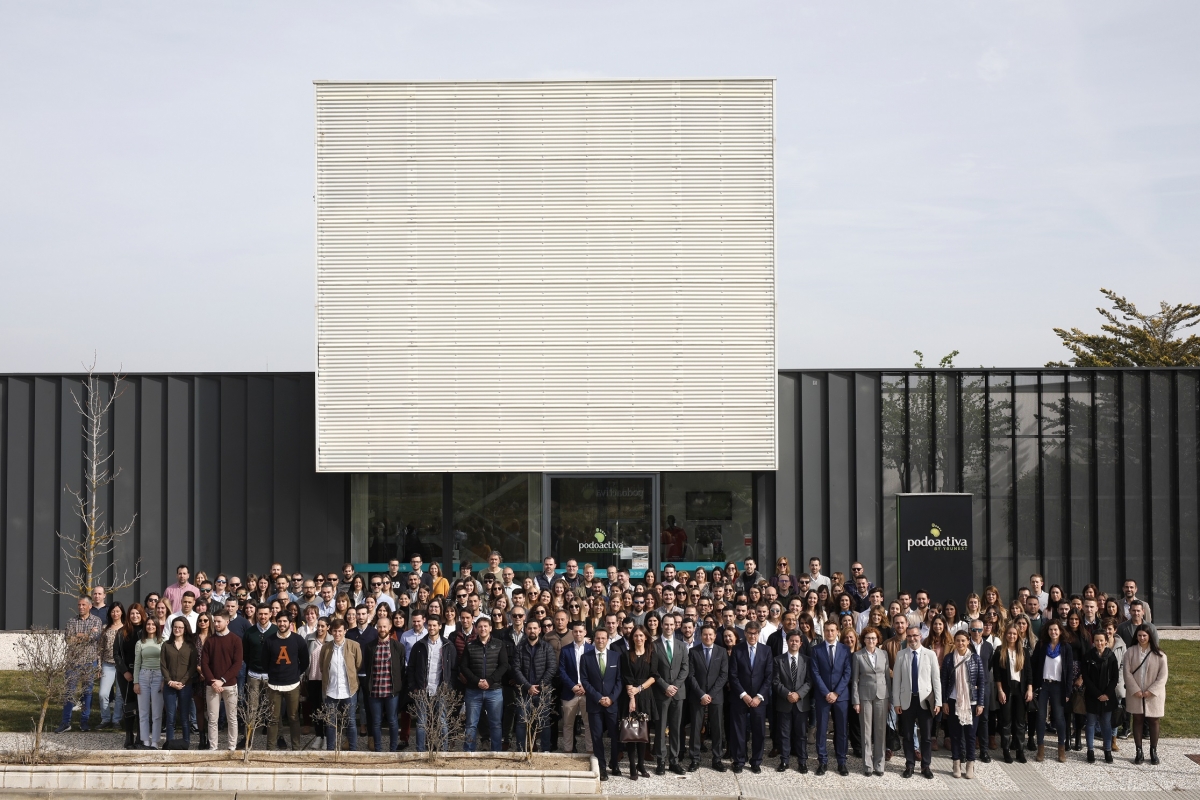