The VIII Podoactiva National Congress brings together more than 200 professionals

More than 200 Podoactiva professionals They met this weekend at the VIII Podoactiva National Congress, the organization's most important annual event, which has been held at the Walqa Technology Park in Huesca during Friday and Saturday.

The workers and experts from the podiatry and biomechanics company from all over Spain and several foreign countries have attended the eighth edition of the congress in which the new national and international expansion plans, protocols and technologies as the "Smart Insole Podoactiva", the first custom smart template of history.

Friday's session began with afamily photo” of all the workers at the door of the Headquarters of Podoactiva. It was attended by the Minister of Economy of the Government of Aragon, Martha Gaston; the mayor of Huesca, Louis Philippe Serrate; and the director of the Walqa Technology Park, Celia Garcia.

Victor Alfaro, general director of Podoactiva, was in charge of opening the congress speaking about the “Present and future of Podoactiva”. "The 2018 and the first months of 2019 have been those of greatest growth and transformation in the history of Podoactiva. We have introduced the first custom smart template ever, the “Smart Insole Podoactiva”; we have one new production line that immerses us in Industry 4.0 counting today with the most modern infrastructure on the planet in terms of design and manufacturing of templates; in terms of expansion, we have acquired the Valencian Foot Institute, being the largest podiatric clinic in the Valencian Community, we open our first street clinic in Milan and we have 6 new Podoactiva Clinics".

The director thanked “the trust of our more than 350.000 patients, they are our reason for being and for them we continue to improve. But none of this would be possible without the great team that forms Podoactiva, more than 200 people who work with effort and enthusiasm for this project”.

After him, they intervened Luis Felipe Serrate and Marta Gaston, who congratulated the entire Podoactiva family for all the projects they are carrying out and thanked the Alfaro brothers for keep betting on Huesca.

Technology, training and expansion were the key topics of the Friday session of the Podoactiva National Congress

Friday was a corporate day addressed to all employees, both podiatrists and workshop personnel, administration, engineering, etc. After Víctor Alfaro and the authorities intervened, Miguel will go up, manager of Podoactiva, and Alberto Fernández, director of expansion of the organization, presented the new clinics and units nationally and internationally. “With the aim of continuing to bring all our services and treatments closer to patients, we have 6 new Podoactiva Clinics and we are in more than 150 podiatric units distributed throughout the Spanish geography”, affirmed Subará.

La training and research are two essential pillars, and this was highlighted in the colloquium of the Doctor Javier Alfaro, technical director and founder of Podoactiva; the Doctor Anthony Gomez, head of research; Y Alexander Almenar, researcher at the Podoactiva Research Department. 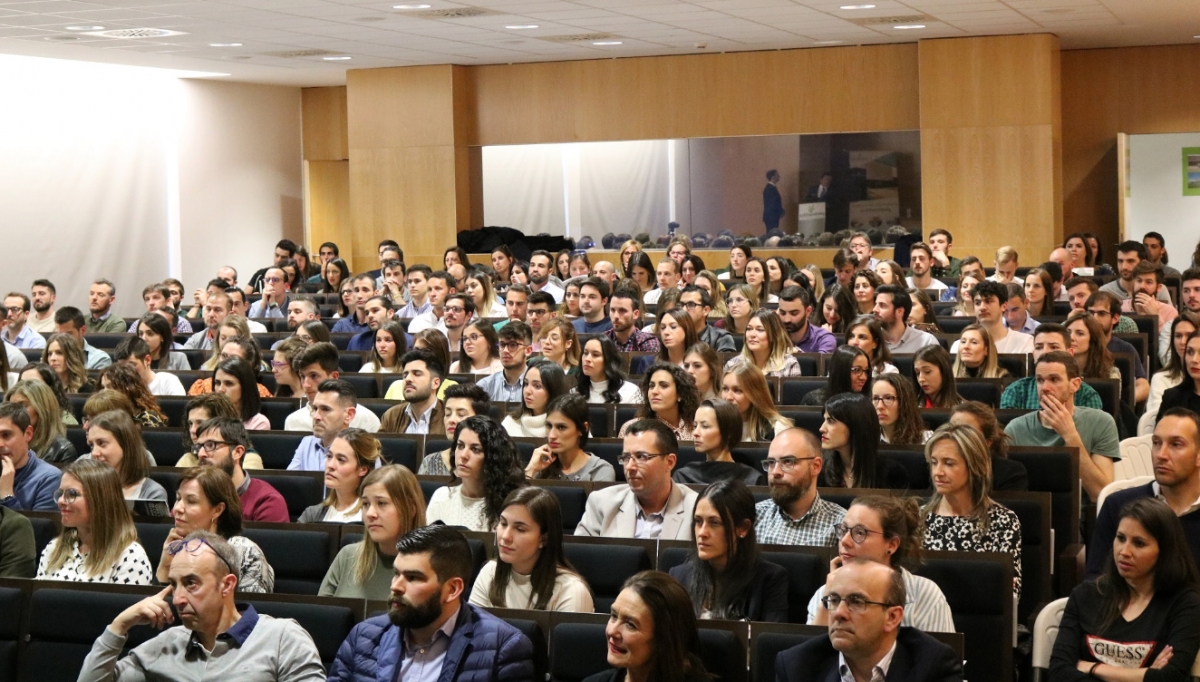 Eloy Monesma and Cristina Navarro conveyed the importance of channels in the process of patient loyalty, and Angel PegueroResponsible for younext, explained that “the new line is a engineering challenge which allows us to expand production capacity” together with Javier Alfaro. Behind them, Marina Azpiroz and Diego Garcia de younext they talked about the immobilizations that they carry out in the technological subsidiary of Podoactiva and presented the new image of “Younext Football Protection”, personalized shin guards made with materials used in F1.

In this edition, the special guest was Patricia Ramirez, psychologist specializing in world of health and sport, who gave a keynote speech for employees insisting on the importance of communication within a company and importance of being positive. “It is a pleasure to be with all of you in this eighth edition of the Podoactiva congress”, he stated before an auditorium with full capacity. Patricia Ramírez donated the amount of the presentation to the International Cooperation NGO. 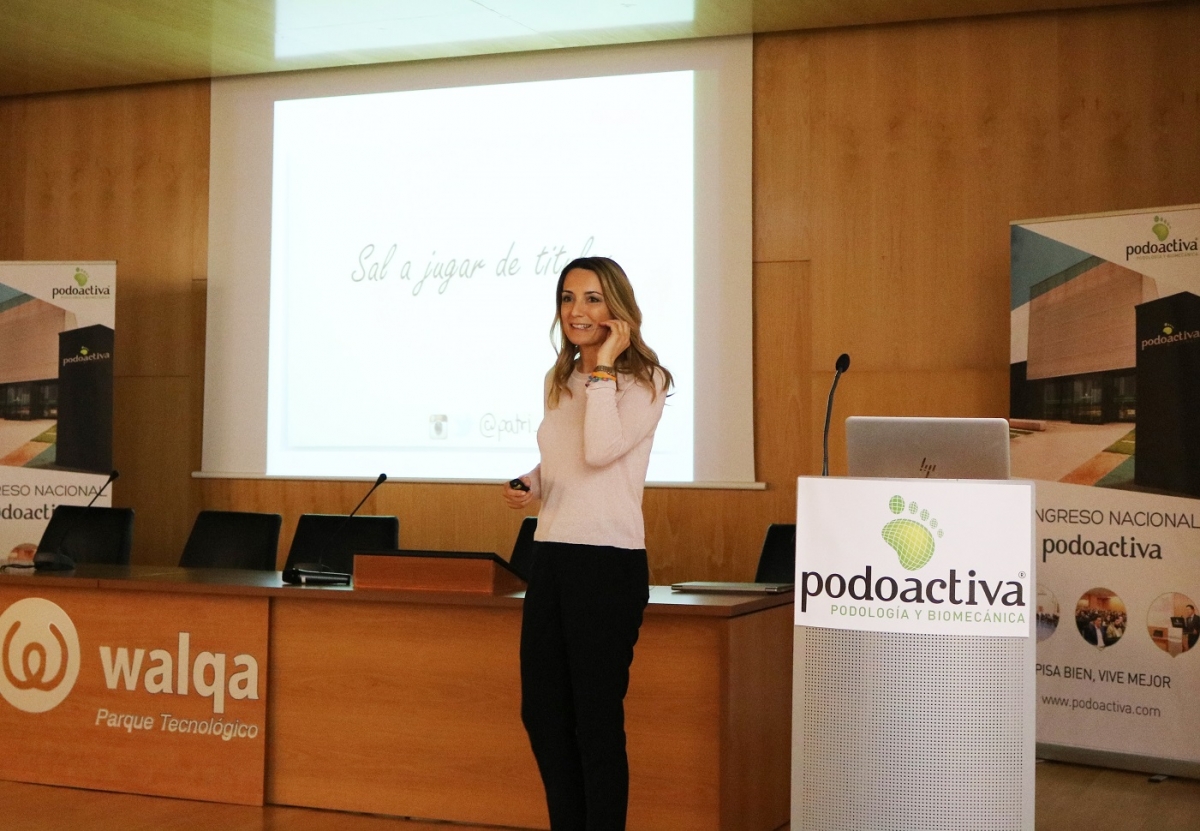 The first day ended with the awards and  lifetime achievement recognition for five Podoactiva employees for their 10 years Inside the company. 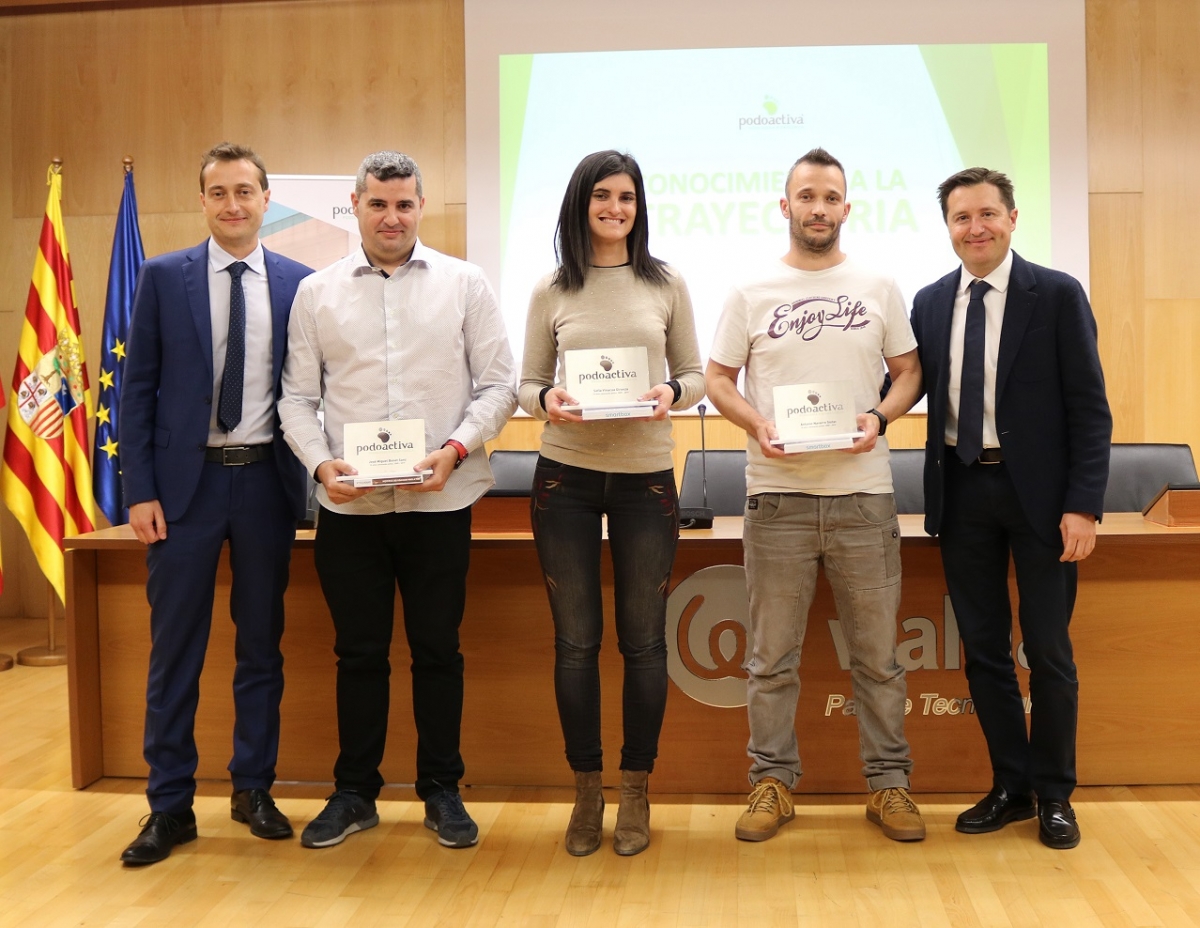 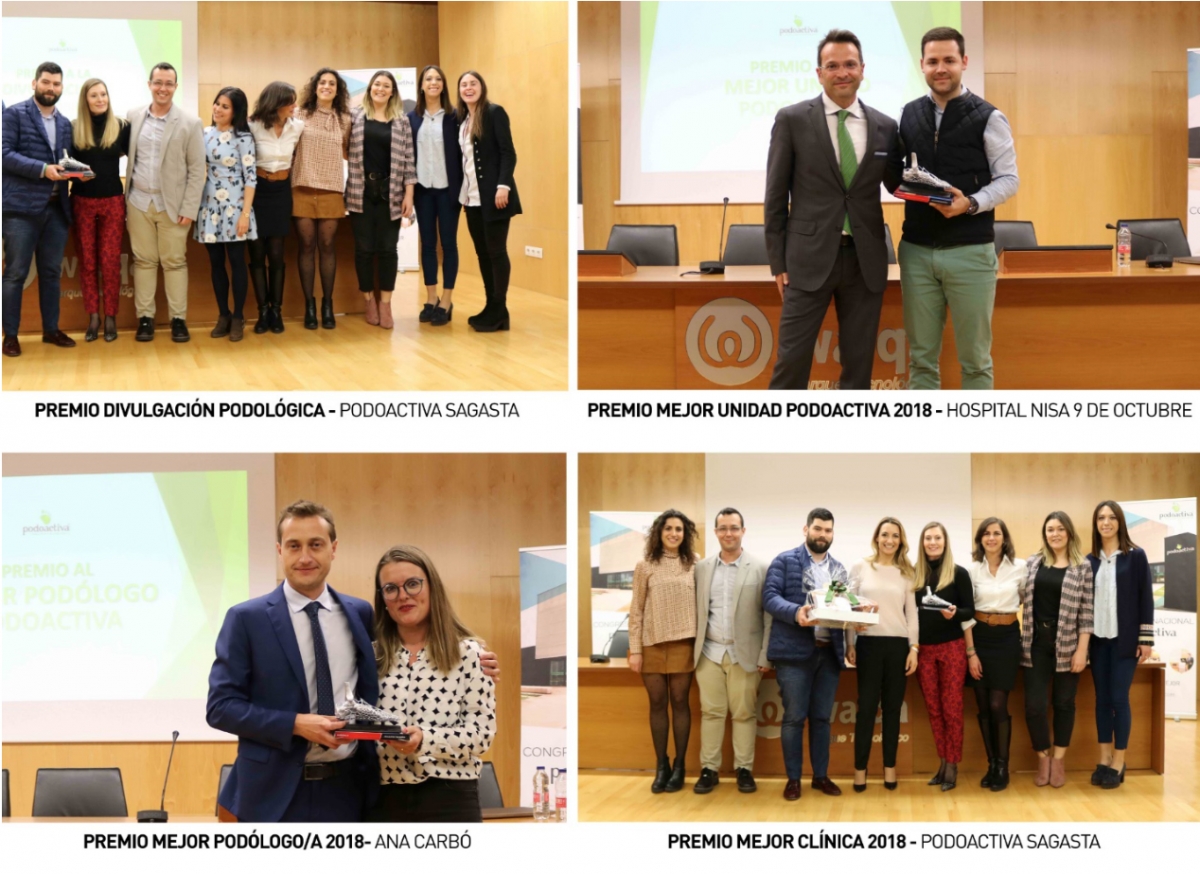 The final touch of the day was the surprise of the “Recognition of Podoactiva Values“, a new award that was given to Miguel will go up, who made a trip this summer to the India along with his wife Coral with the “Football is life” project of International Cooperation. This is one of the NGOs with which the Podoactiva Foundation collaborates through the book "Everything begins with a step" by Victor Alfaro. All profits from the copyright of the book go to two social organizations. 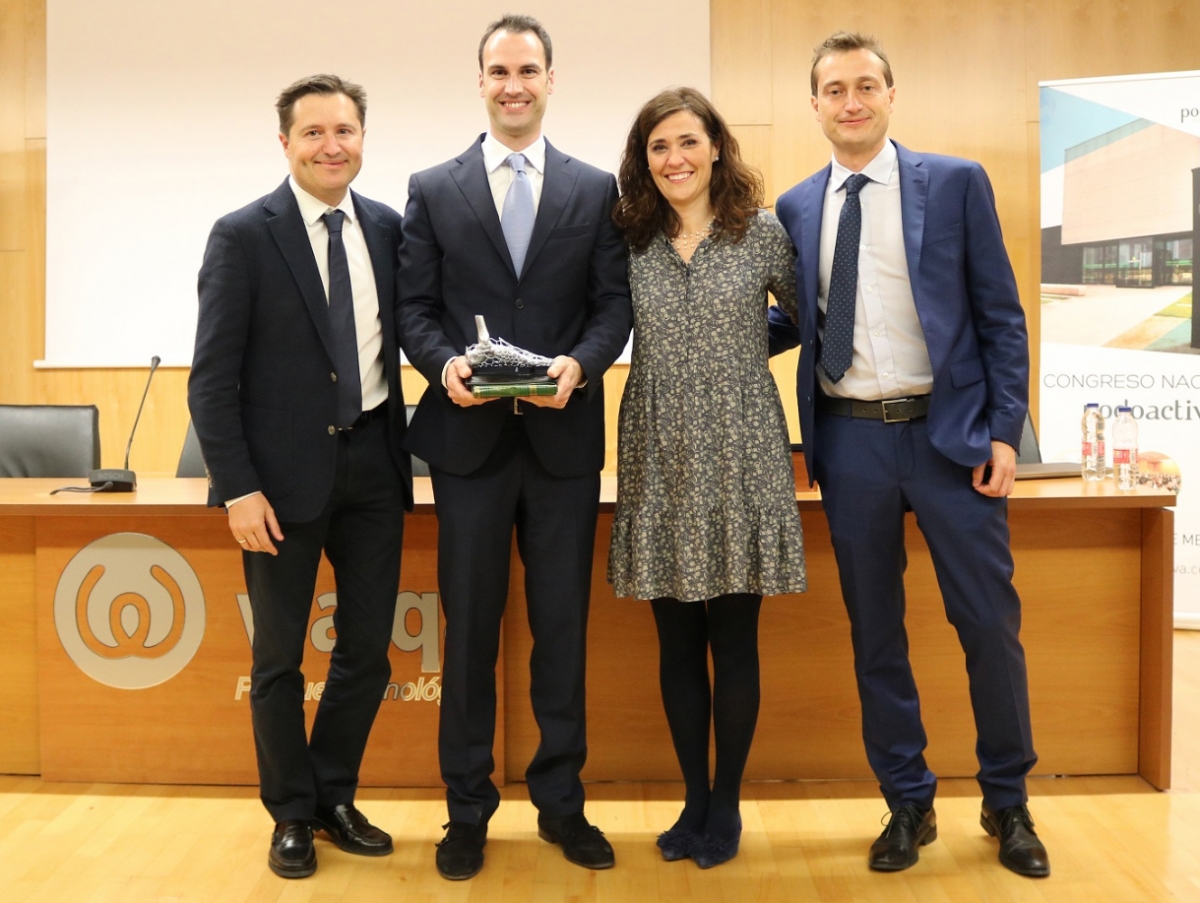 La Saturday session It started with the meeting of all the reception and administration staff of the Podoactiva Clinics in the Central Building of the Walqa Technology Park. At the same time, Victor Alfaro kicked off the day with his presentation on “Growth through personal branding". 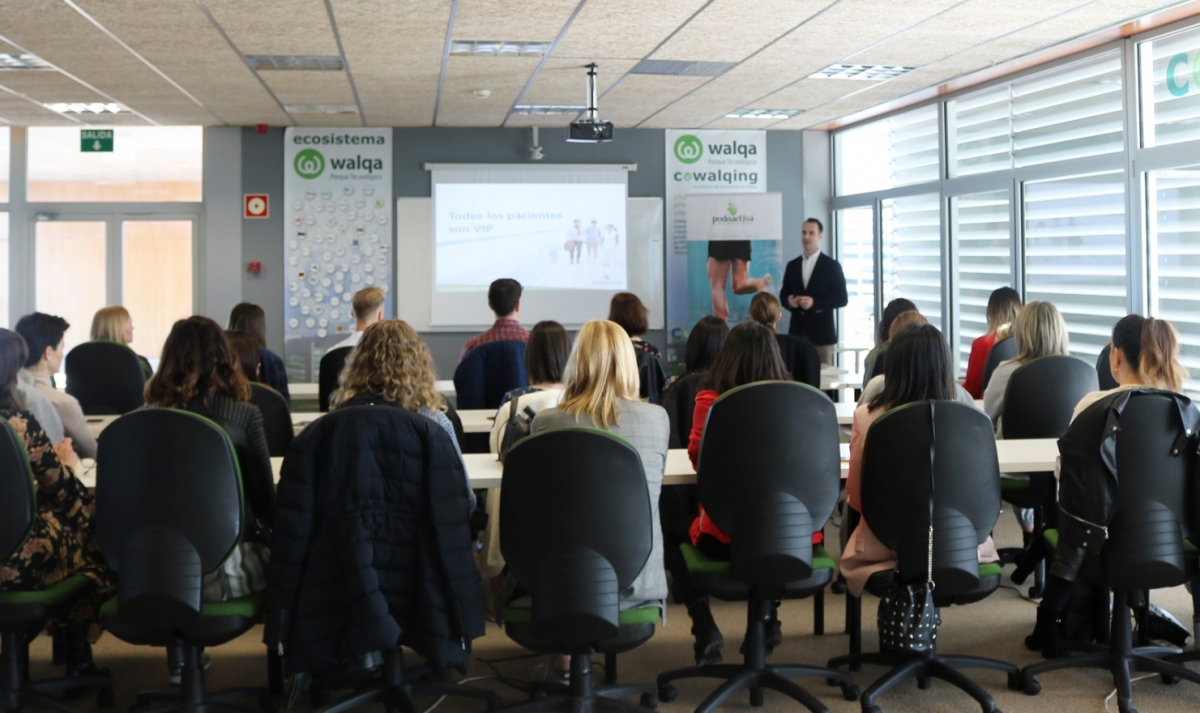 This edition, as a novelty, has been divided into four tables in which different clinical and scientific issues. After Alfaro's colloquium, the first table began on “Podiatric surgery” in which five Podoactiva experts participated: Pedro Nogales, Borja Pérez, Alejandro Adrada, Raúl Ramos and Roberto Moratino. The specialists exposed real cases of patients in the different consultations. At the round table, moderated by carla lanuza, the questions of those present were answered and a small colloquium was held between the professionals.

The second table, moderated by Jorge Sanguesa, everything related to “Applied orthopedics”. the speakers, Antonio Gomez, Javier Alfaro, Carlos Martin, and Hector Saavedra were the participants. It should be noted that Antonio Gómez, head of the Podoactiva Research Department, told all the news about the “Smart Insole Podoactiva” and made a demo live, as he himself wore the custom smart insole in his shoes. 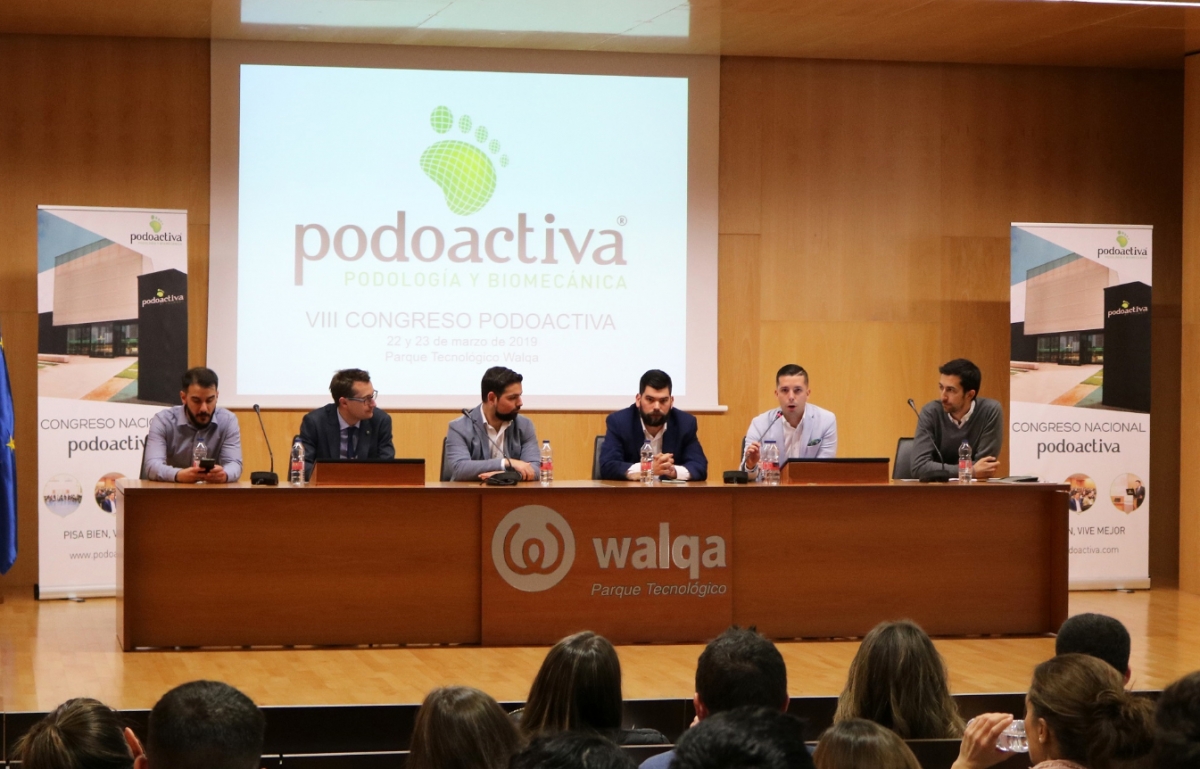 After lunch to regain strength, Alejandro Peña, podiatrist from Podoactiva Sevilla, opened the table on “Exploration and biomechanics” moderated by Jairo Casal. His partner at Real Betis Balompié, the physiotherapist Mario Tomas Gutierrez, gave examples of pathologies and problems found in the locker room and highlighted the Importance of the podiatrist within soccer teams. Javier del Rio, Marcel Ruiz, Marcelo Robles and Antonio Donaire they completed the third table with their presentations. 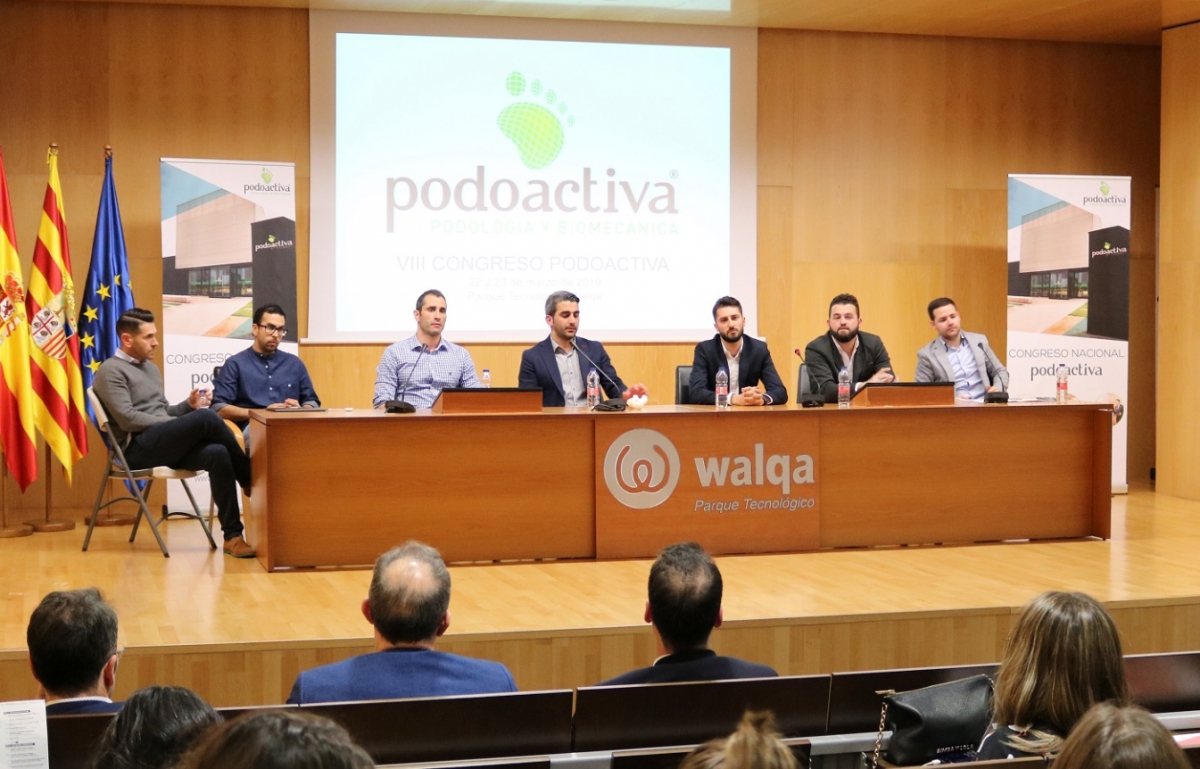 In the fourth and last table, moderated by Conchi Salom, on "Chiropody and complementary tests”, they exposed everything related to chiropody and different clinical treatments. anna square He spoke about "Ortonixia: technique and results"; Jose Vico on “Real and functional asymmetries; Y Lucia Mondelo dealt with the topic "Chiropody Protocol". 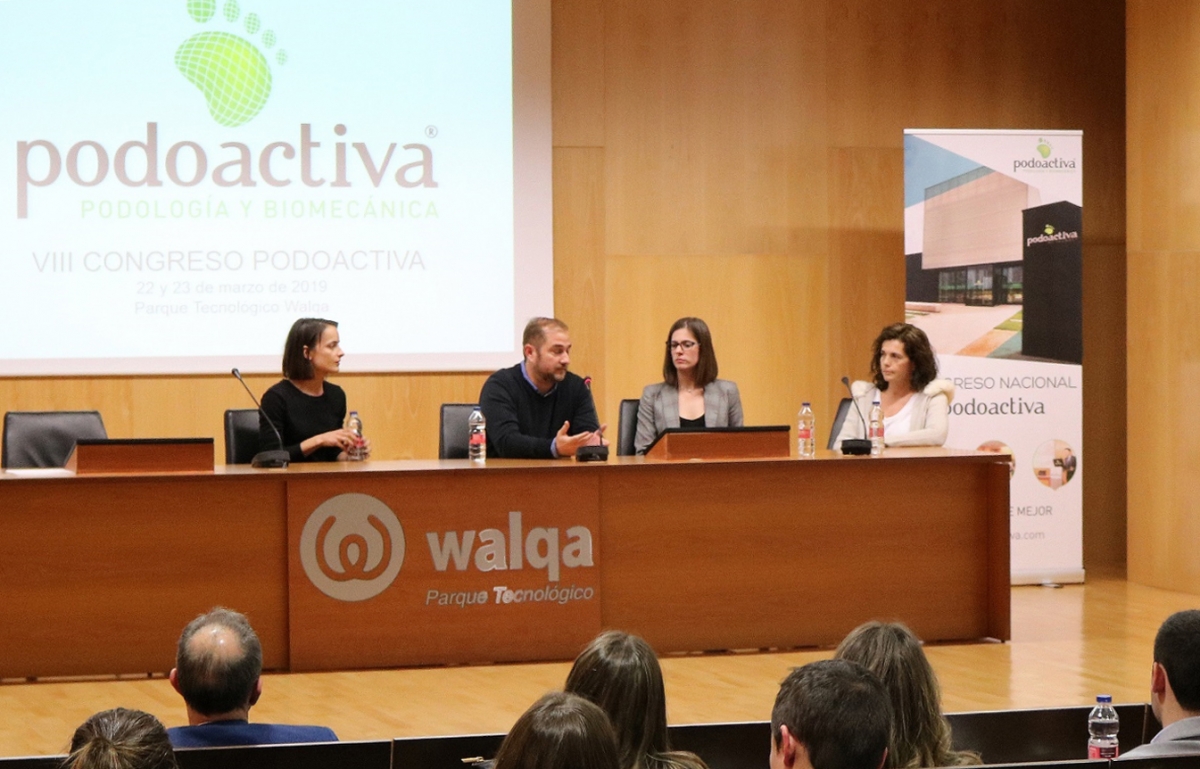 The day continued with the award ceremony for “Better idea” which was for Almudena Sánchez of Clínica Podoactiva Sagasta since it proposed an improvement in the computer system in order to improve patient care. The objective of this contest is to continue with the growth of Podoactiva applying the proposals of the employees. After that, the award was given to “Best scientific paper”, an award that was voted for by all those present through an online survey. The award went to Peter Nogales of Podoactiva Marbella thanks to his presentation "Pathological anatomy: about a case". 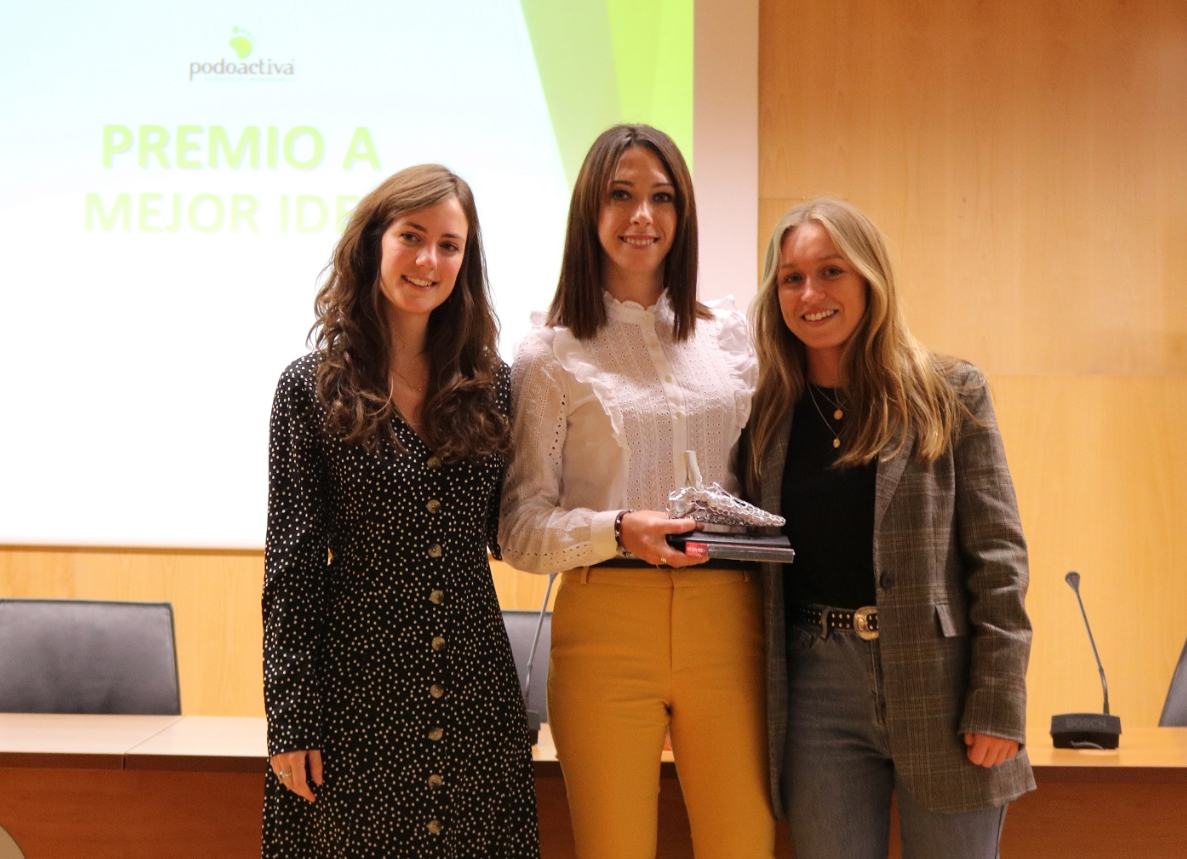 From the Central Headquarters of Podoactiva we want to thank everyone for attending and... See you next year!