In the daily consultation we can find patients with this pathology. It is a characteristic condition in long-distance runners and to a slightly lesser extent in cyclists. It is a tendinitis of the iliotibial band and can be accompanied by a process of bursitis. 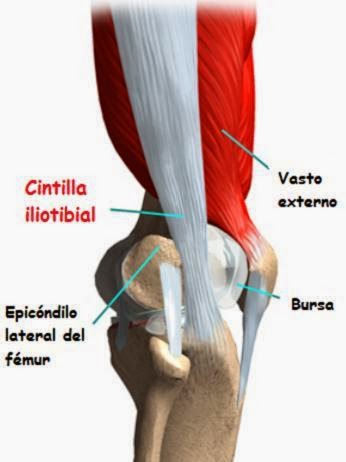 What is the iliotibial band?

In the consultation daily we can find patients with this pathology. It is a characteristic condition in Corridors long distance and slightly to a lesser extent in cyclists. It is a tendinitis of the iliotibial band and may be accompanied by a process of bursitis.

La Iliotibial belt It is part of the tensor muscle of the fascia lata, having its origin located in the anterior superior iliac spine, and its insertion is through the iliotibial band in the lateral condyle of the tibia (in Gerdy's Tubercle). Its main function is the Abduction (separation) of the hip and the stabilization of the knee on its external face.

How is it produced?

It usually develops from Progressive form, limiting the continuity in the race time. Starting after ten or fifteen minutes, and preventing the continuity of the race. The pain increases with inclines as well as with a slow pace, because the contact time of the IT band with the epicondyle increases.

– Use of inappropriate footwear for sports.

– Not doing the stretches correctly.

How is the diagnosis?

Diagnosis is simple through a stretcher examination and localization of pain by palpation of the lateral epicondyle of the femur (outer aspect of the knee). Trigger points often exist along the fascia lata. The diagnosis can be completed with various muscle assessment tests. Isolated are the times when complementary tests are necessary, but in doubtful diagnoses, weight-bearing radiographs, ultrasound or MRI are requested.

A 30-year-old male, with athletic sports activity of around 30-40 km per week, comes to the clinic due to bilateral discomfort on the outer side of the knee that prevents him from practicing sports. In childhood he received treatment with shoe inserts for possible flat feet.

We observed a decrease in the support of the external longitudinal arch, creating a displacement of the load towards the internal plantar. This position causes greater tension in the external aspect of the knee (iliotibial band)

The pressure on the ball of the first finger reflects the increase in pronation.

- Use of Podoactiva Elite Sport insoles with internal containment that produces control of the medilization of the foot (pronation) and less tension in the iliotibial band (external side of the knee).
- Stretching exercises.
– Feedback exercises (biofeedback).
– Proprioception.
- Relative rest.

– After two months of treatment, the patient reflects a Mejora in the knee. Increasing foot stability and reducing muscle fatigue after sports practice. In the subsequent assessment on a stretcher, less tension was observed in the iliotibial band, posterior tibial and calves.

– Treatment of the plantar orthosis was continued and scheduled reviews.

Podoactiva podiatrist and expert in Biomechanics